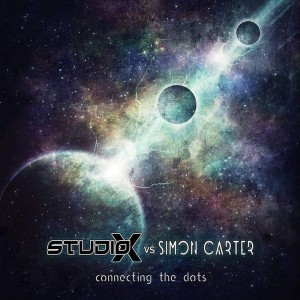 Background/Info: Lawrie Masson (aka Studio-X) and Simon Carter became a successful duo since the “Breaking The Void”-album (2014) while their last year released full length “Ad Astra Volantis”, in my opinion  belongs to the best productions of 2015.

“Connecting The Dots” is more than simply an EP. It features 8 exclusive songs, 5 remixes plus the original title-song.

Content: If you’re familiar with the hard techno-body style of Studio-X the new songs will not surprise you. This is a new exploration of the limits of electronic music resulting into a sonic fusion between dark body vibes and techno-trance stuff. The vocals became harder and sometimes enraged while robotic effects have been used as well plus noticeable samplings.

The compositions avoid the cheap techno/dance tricks, but have been constructed with intelligence and a right balance between all different sources of inspiration. The inspiration of both artists seems to be endless. Next to the aforementioned influences you still can hear a few retro-electronic elements. It’s quite unusual to see a band returning that soon after their latest album to unleash 8 irresistible and powerful cuts.

I was less impressed by most of the remixes, which feature bands like Caustic, Antibody and the less familiar VV303. My favorite remix has been accomplished by Alkemic Generator injecting hard guitar riffs on the title-song.

+ + + : Studio-X vs. Simon Carter are once again has taking me by surprise unleashing a phenomenal, dark techno-body sound. The new songs reveal an ingenious fusion between different influences.

Conclusion: If you think that techno music is for sissies, Studio-X vs. Simon Carter will get you down on your knees begging for mercy. Forget all what you’ve heard about techno music and taste the sound of sin composed by these sonic gurus.