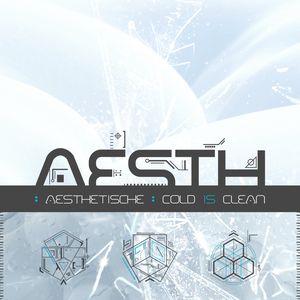 Background/Info: From Aghast View to Aesthetische, Guilherme Pires and Fabricio Viscardi clearly have succeeded in their sonic metamorphosis. Aesthetische has already released several noticeable productions under their new moniker and they here strike back with new and reworked material.

Content:“Cold Is Clean” takes off with a reworked version of “Cold Glass” which was originally featured on their debut album “Powerswitch [LTDPWR] ” featuring Duffuzion vocalist Xev. The song is not my favorite, but it illustrates the raw-dance approach of the Brazilian band.

The new song “Blue Print” features Mari Kattman on vocals. We here discover a kind of raw and industrialized dance version of Delerium joined by heavy female vocals. There also is another new track, which displays the raw, dance and technoid genre of the band, but it also confirms their great writing skills.

You also will get 2 remixes and I here especially recommend the “Club Edit” of “Dirt” by industrial-techno genius Simon Carter.

+ + + : I like the raw industrial arrangements mixed with dance music.

– – – : Aesthetische will once again disappoint the early EBM fans of Aghast View.

Conclusion: Aestetische never stops to surprise me! “Cold Is Clean” again sounds like a divine, but perverted dance-format for rough techno-heads.