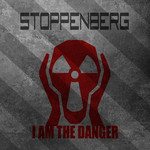 Background/Info: Stoppenberg is Jan Loamfield who we all know as one of the most famous and renowned contemporary trance-noise architect of the electro-industrial scene. Noisuf-X and X-Fusion both are his major projects, but he also started producing music under the Stoppenberg moniker. Earlier this year he released the kicking “Assault”-album. Stoppenberg is already striking back with this EP revealing 3 new cuts plus 13 remixes.

Content: The title song “I Am The Danger” clearly reveals the essence of this project. It sounds pretty similar to Noisuf-X, but in a more body-techno orientated style. There where Noisuf-X experiments with pure industrial-rave, Stoppenberg comes closer to a mix of EBM and hard-techno music. The songs are carried by a pumping kick and aggressive sequences confirming the production skills of this German genius.

Both other new cuts are quite similar in style and approach, but not as hard. It however remains a well-crafted and total party-music format made of great sound blasts and cool samplings.

We next get an impressive chapter featuring 13 remixes. Three songs of the album have been exposed to remix skills of bands like Destillat, Poltergeist, Benjamin’s Plague, Viscera Drip, Maschinengeits, Worsaw ao. Jan Loamfield clearly didn’t choose for the most famous and familiar names in the scene. He gave the opportunity to several promising bands to show their creativity in remixing the songs “Radioactive”, “Liberty” and “Unite!”. The main part of the remixes hold on to the Stoppenberg power while adding a personal touch to the original songs.

+ + + : “I Am The Danger” is for sure a potential hit featuring some elements of the Noisuf-X success formula, but transposed into a techno-body vein. I’m not comparing Stoppenberg with the sound of Komor Kommando, but there are some similarities in the global approach and production. I also noticed several cool remixes with a special mention for the work of Benjamin’s Plague and DJ Malkavian. It also is an opportunity to discover a nice selection of upcoming artists.

– – – : I think it’s a pity there’s not one single remix of the title song, which is one of the best Stoppenberg cuts so far. I also would have liked to hear a few remixes made by Jan Loamfield himself and it would have been cool to hear Stoppenberg remixes by Noisuf-X.

Conclusion: Stoppenberg is a strong sonic elixir that will bring you instantly in a frenetic dance mood!