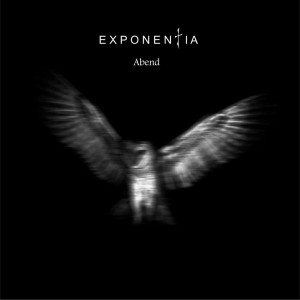 Background/Info: Ludovic Dhenry is French artist who set up Exponentia in 2012. “Abend” is the 4th full length released on his own label Neris Records.

Content: The previous work “Ghost” (2014) revealed an interesting progression in sound and global production while holding on to the gothic and neo-classic influences of the early beginning work. “Abend” sounds quite similar in influences and writing. Dhenry takes care of every single element of the composition.

The work reminds me once more of Sopor Aeternus, but in a less elaborated and artistic format. But the neo-classic and desperate sounding moods and the orchestral arrangements are quite comparable. Exponentia composes on his own there where Anna-Varney Cantodea got the help of an entire ensemble (cf. ‘The Ensemble Of Shadows’).

“Abend” invites the listener to join in for an endless night made of long-duration, moody cuts. The sound formula is quite simple, but globally speaking pretty efficient. The songs are carried by melodic passages and a kind of cinematographic atmosphere filled with wafting darkness. It sounds pretty sad and somewhat theatrical, which is an element accentuated by the German vocals and way of singing.

+ + + : Exponentia is mainly characterized by a dark and evasive sound filled with beautiful sadness. Magic operates between the different sound layers and the German vocals. The melodic element and neo-classic inspiration both are quite noticeable elements.

– – – : The shadow of Sopor Aeternus is hanging over this work, but it all sounds more simple and a bit under-produced –although it’s an aspect that has been seriously improved throughout the years. If Exponentia would work with some talented guest musicians inject an artistic and authentic touch and maybe a producer to find the right mix between it all, this band would really become a reference in the genre.

Conclusion: Exponentia once again reveals great artistic ideas and I really like the DIY attitude of this artist, but sometimes you maybe have to reconsider some points of view like working with other musicians to get more authenticity and real emotion into your work.