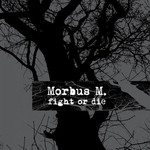 Background/Info: Morbus M. is a German solo-project driven by René Klimaczewski aka Klima aka Exocet. After a debut album (cf. “Forget The Past”) released in 2010 on Hands it took 6 years for Morbus M. to achieve a new album.

Content: “Fight Or Die” sounds like a hard dilemma and I honestly expected a kind of merciless industrial sound to symbolize this title. After the rather experimental debut work, this successor clearly sounds like a sonic metamorphosis into a more sophisticated and intelligent industrial sound. The work is characterized by bombastic rhythms at one side and great electronic treatments at the other side. A few cuts are less bombastic, but reveal a slower and somewhat sensual-like cadence.

The work is quite diverse moving from brilliant IDM parts towards cinematographic passages to electro-industrial high-tech. Most of the cuts are pretty minimal, but are always carried by an impressive sound production. A few spoken and manipulated sampled vocals can be heard now and then. But the most surprising element probably is the kind of piano arrangement running through “Inside Out”.

I also have to mention a remix made by the_empath.

+ + + : Morbus M. has to put it’s name back on the industrial sound map and I can assure you this sophisticated album will clearly bring this project back in the spotlight while conquering new fans. There are a few amazing IDM-pieces, which mainly characterize the great and professional production of this album. Just pay attention for genius cuts like “System Of Silence” and “Took A Picture”.

– – – : I can imagine early fans of Morbus M. will maybe get a bit disappointed by this resurrection. My personal and single regret maybe is that a few cuts are not as into the IDM style, which remains the main strength of the work.

Conclusion: “Fight Or Die” might be seen as a prophetic title for this band, which hasn’t release new material in years. After listening to this work I would say that the verdict is quite evidence based: this is a genius resurrection!