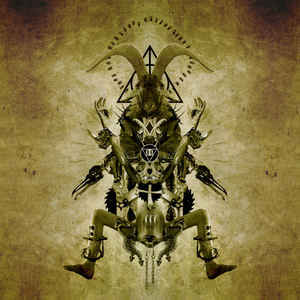 Background/Info: The Texan duo J. Stillings – L. Kerr started terrorizing the world in 1999. They’ve released an impressive number of productions and are now back on track to unleash their ninth album, which is also their first new full length since “The Empirics Guild” (2013).

Content: “Calm Morbidity” takes off with a dark-ambient and noisy prelude, which is just a warm-up for harder sound treatments that progressively join in. Echoing noises and horror screams are some of the most noticeable elements running through their work. It’s accomplished by overwhelming sound waves and misty sonic layers.

The work sounds like a tormenting experience with a strong visual strength. You get the impression of entering the last gate before hell. It’s a sonic hell filled with tortured sounds and oppressive sound atmospheres. The vocals are as if they are emerging from a distant planet, but their shouting expression clearly accentuate the state of torment created by “Calm Morbidity”.

+ + + : There’s not one single track featured on this album to throw away. Steel Hook Prostheses progressively built up a tormenting sound universe made of overwhelming sound waves, foggy atmospheres, screams of terror and ghost-like vocals. The work stands for pure terror, but it still is a captivating production revealing multiple climaxes. “Cancer Maiden” and “Stranguary” both are highlights revealing the talent of this obscure formation.

– – – : If you’re not familiar with this kind of extreme sound treatments and atmospheres you better avoid “Calm Morbidity”. It’s more like advice instead of a negative element.

Conclusion: The title “Calm Morbidity” appears to be a euphemism for the obscure power emerging from this work. This album sounds like a clear signal from hell!