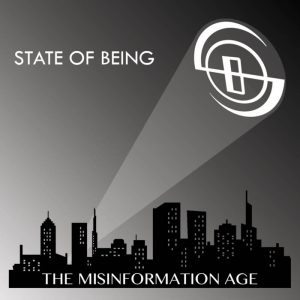 Background/Info: This album marks the return of State Of Being. Set up and driven by Christopher Foldi, this formation saw the light of day in 1989 and mainly released their work during the 90s and early millennium years. Not much really happened –except a new EP, during the past few years, but Foldi got contaminated again by the music virus to move on with State Of being. Nine new songs have been released and assembled under the promising title “The Misinformation Age”.

Content: The work takes off with a Depeche Mode-influenced song. The music holds on the good-old electro-pop style of the band and was joined and sometimes empowered by guitar. After a rather hesitant beginning part, some of the last tracks reveal a more melodic approach reinforced with carrying choruses. Some passages are darker while the vocals became more passionate. The album finally ends the way it all started, a song with a wink to Depeche Mode.

+ + + : State Of Being is back on track and that’s for sure a relief for the fans of this formation. The compositions are well-crafted and featuring a few cool cuts at the end of the album. “Signs” and “Tread” both are the best exponents of the work, but I also enjoyed the darker-like “Inches Away” and the dépêche Mode inspired “I Will Grow”.

– – – : The first part of the album couldn’t convince me at any single moment. Songs are clean and polished, but missing passion in the vocals and the music. There’s no climax there. The second part sounds a bit better although I can’t say there’s a real big hit hiding there.

Conclusion: “The Misinformation Age” sounds a bit like a new beginning. I already heard more convincing and inspired work from State Of Being so I have some reservations about the impact of this new work.

Tags: State of Being