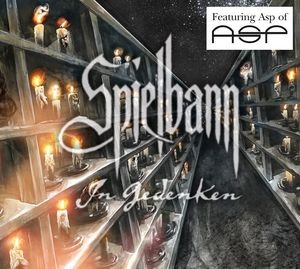 Content: Spielbann is a German combo consisting of 5 members. The band has already been active for several years and has self-released previous albums. Joining an established and leading label like Trisol for sure must be one of the biggest consecrations for the band thus far.

I have to say I’m not surprised to see Spielbann joining the Trisol roster. They have these typical German underground sound mixing elements of gothic-and rock music, which became a kind of Trisol’s trademark. And that’s not all because the front man of ASP (Alexander Spreng) contributed to this album by writing a few lyrics, taking part to some songs and getting involved in the global production process.

Spielbann also has this typical German attraction for the sound and the language. When visiting the homepage of the band it quickly becomes clear that Spielbann is a band that mainly focuses on the German-speaking scene(s). It’s a pity there’s no information in English at their site, but I’m not here to complain about their site, but just paying attention for their sound.

It becomes rapidly clear that Spielbann is a professional sounding band featuring experienced musicians. The guitar playing is one of their main strengths and the multiple solo parts clearly will satisfy lovers of gothic-, metal- and rock music. Spielbann is shaking all these influences together while the finishing touch at most of the songs consist of refined electronic arrangements injecting a sweet taste of melody. That’s quite important during the choruses, which this way is mixing the power of guitar and subtlety of electronics.

There’s a kind of dark-romantic impression emerging from the songs and I here mainly refer to “Geister, Die Ich Rief”. Another attention grabber is “In Alle Ewigkeit” where electronics and other instruments become totally one.

This work is alternating harder cuts and dreamy passages. Spielbann even explores a kind of truly ballad style on “Aquarell”, which appears to be a beautiful sound canvas on, which you can dream away. This sensation is reinforced by the sound of the seagulls at the end of the song. The last part of the work reveals a few more dreamy cuts. “Lebewohl” is another beautiful cut in the genre, which reveals a poignant dark and gothic-like reverie.

A last, but essential element about this band and album is the production of the vocals. The band features male- (Seb Storm) and female vocals (Nic Frost), which mainly create beautiful duo parts. It’s not exactly the usual ‘fight’ between harsh male vocals and heavenly female vocals. The singers are absolutely complementary, but in a different and more symbiotic way. This fusion comes especially through at “Hydra”.

Conclusion: I’m quite confident Spielbann will slowly conquer a wider fan base in their homeland. This is a real professional work. The only regret maybe is the absence of an absolute potential hit.

Since you’re here … … we have a small favour to ask. More people are reading Side-Line Magazine than ever but advertising revenues across the media are falling fast. And unlike many news organisations, we haven’t put up a paywall – we want to keep our journalism as open as we can. So you can see why we need to ask for your help. Side-Line’s independent journalism takes a lot of time, money and hard work to produce. But we do it because we want to push the artists we like and who are equally fighting to survive. If everyone who reads our reporting, who likes it, helps fund it, our future would be much more secure. For as little as 5 US$, you can support Side-Line Magazine – and it only takes a minute. Thank you. The donations are safely powered by Paypal.
Tags: Spielbann