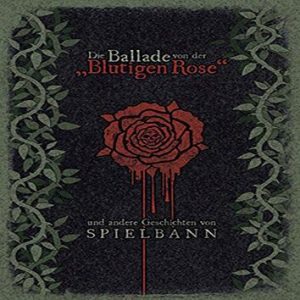 Background/Info: Throughout the years Spielbann has acquired a serious reputation in their homeland (Germany) and became a respected band from the Trisol roster. Their new opus is inspired by fairytales and stories, which have been reworked and transposed into the goth-metal universe of the band. Notice by the way that Alexander Spreng (ASP) contributed to the lyrical content and co-produced the album.

Content: The new work reveals the growing maturity of Spielbann. They remain faithful to their gothic atmospheres and metal guitar riffs, but they gained in global power. The biggest evolution is the increased orchestral arrangements injecting extra volume to the sound. It creates a kind of ‘cathedral’ sound effect while on the other side they also hold onto more refined piano-like arrangements.

The work is powerful and also moves towards pure melancholic passages. I also noticed some folk influences and even cinematographic parts.

+ + + : “Die Ballade Von Der Blutigen Rose” covers an impressive canvas of goth-metal music, which has been mixed with a few more influences. It’s a diverse and artistic opus, but also an overwhelming production. The orchestral element of the work sounds great while I still like the subtle and more polished arrangements. Spielbann remains a typical German goth-metal formation, but the global evolution in sound makes the music accessible for a wider (non-German) audience. Just pay attention for the opening cut featuring great female backing vocals or “Hertz Der Finsternis” revealing a great finale.

– – – : I can’t really find minus points for this work, which says enough about the quality of this album.

Conclusion: Without a shadow of a doubt, “Die Ballade Von Der Blutigen Rose” is the best Spielbann album thus far. This is a powerful and beautiful release!