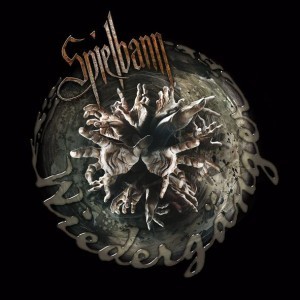 Background/Info: Spielbann last year joined Trisol to unleash their official debut album “In Gedenken”, which revealed a mature writing and an interesting twist between the influences. “Wiedergänger” reveals new songs, and also older tracks that have been reworked and several live versions.

Content: The 3 new songs take off sound in the line of their previous work. There’s a noticeable harmony between their main sources of inspiration moving from gothic to dark-rock to metal. The songs have been accomplished with some epic arrangements and piano sequences. The vocals are sung in their Mother tongue (German) revealing male- and female parts.

Spielbahn moves in between harder and somewhat menacing cuts and a softer and more moody, sensible format. The reworked songs sound in a similar way while you now and then will notice a solid guitar solo passage and a shimmering influence of Rammstein.

The live part features 7 songs. This is an opportunity to rediscover songs from their previous album, but this time live. There again is a move from harder and merciless cuts towards moodier and even sensitive passages. One thing is for sure, this band clearly sounds like a mature live formation. The songs are carried by charismatic vocals, furious guitar riffs, a devilish cadence and some real elegance.

+ + + : Spielbann features all required elements to ravish an audience devoted to gothic, rock & metal music. They seem like they feel comfortable composing harder cuts on one side and sensitive tracks on the other. Another interesting element is the well-crafted live versions of a few songs. Last, but not least, Trisol takes once more care to release an artistic digipak featuring 2 booklets, which will ravish the fans.

– – – : Even if Spielbann self-released 2 albums before their official debut, I didn’t exactly expect a new opus  to feature so many live versions and only 3 ‘new’ songs. The reworked songs are not exactly the most convincing part of the work.

Conclusion: If you want to discover a new and typical German formation, I would highly recommend you to put your hands on the album “In Gedenken” and if you became a fan of this work, you’re going to love “Wiedergänger”.