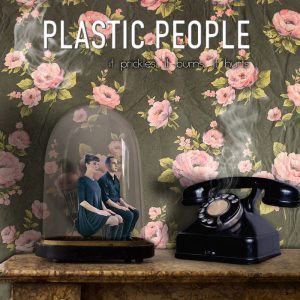 Content: Plastic People claims to be inspired by different 80s bands and that’s for sure an element that directly comes through. The sound is somewhere in between typical new-wave music and catchy pop elements. The songs are carried by solid guitar parts.

+ + + : The work reflects typical 80s new-wave influences. The new-wave style is carried by some cool and catchy pop aspects. I especially like the 80s-like guitar playing on “Slave Feelings” and “Lost Soldiers”. The retro-spirit is not only presented in the sound, but in the global artwork of this album. I like this artistic approach resulting in a funny cover.

– – – : “It Prickles, It Burns, It Hurts” doesn’t exactly sound like a debut album, but I’m missing a few, essentials elements to speak about a successful work. The production of the vocals is just one example that has to be improved. There’s no real climax nor a potential hit.

Conclusion: Plastic People is not setting the world alight although I like the band’s approach. You can feel that they have some potential, but it now has to come through. This is the kind of band which needs a producer to elevate the global production.