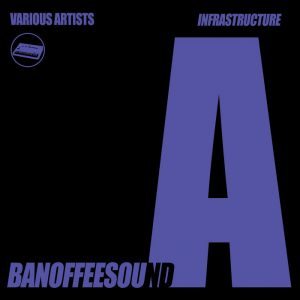 Background/Info: Banoffeesound is a British label you maybe know from bands like Spray, Anna Stimpson, Empire State Human or Ricardo Autobahn. The label has released an interesting and definitely conceptual release featuring 9 bands. The common element between all those bands is the use of the Arp Odyssey synthesizer. This is a legendary analogue synthesizer, which is actually still manufactured.

Content: The featured bands deal with different kinds of music. This compilation moves from dance/house inspired music towards electro-pop and also cinematographic music. The common touch between most of the bands is a kind of ‘space’-like sound flavor hanging over the songs. That’s probably the magic effect of the synthesizer.

+ + + : Speaking for myself I like this kind of concept, which first of all is a way to remind so-called musicians that composing electronic music is much more than simply using software synths. Analogue synthesizers will always have this unique and powerful touch a software synth will never have. The compilation is pretty diversified in genres and global sound approach. I have a preference for the wave-pop from Jules Verne Theory, the raw, danceable treatments of King Of Owls and the somewhat acid-minded approach from Ricardo Autobahn.

– – – : I prefer the concept of the album instead of the varied content. “Infrastructure” clearly sounds more like a (deserved) propaganda and demonstration of an analogue synthesizer and less like a compilation with some homogeneity in the bands and the genre they’re dealing with.

Conclusion: I don’t want to reactivate an old dilemma: analogue- or digital synthesizers, but speaking for myself I think analogue gear will always have this unique sound DNA.

Since you’re here … … we have a small favour to ask. More people are reading Side-Line Magazine than ever but advertising revenues across the media are falling fast. And unlike many news organisations, we haven’t put up a paywall – we want to keep our journalism as open as we can. So you can see why we need to ask for your help. Side-Line’s independent journalism takes a lot of time, money and hard work to produce. But we do it because we want to push the artists we like and who are equally fighting to survive. If everyone who reads our reporting, who likes it, helps fund it, our future would be much more secure. For as little as 5 US$, you can support Side-Line Magazine – and it only takes a minute. Thank you. The donations are safely powered by Paypal.
Tags: Propaganda, Spray, V/A, V/A Infrastructure