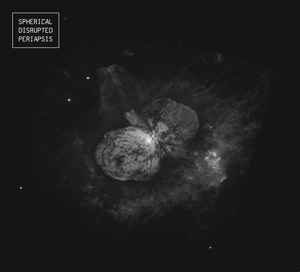 Background/Info: Audiophob co-owner Mirko Hentrich is involved in numerous music projects, but Spherical Disrupted definitely remains the most famous and recognized one. Nearly seven years have passed since the previous full length so no doubt about “Periapsis” will ravish all fans of this German electro project.

The new work is inspired by the twin star system Eta Carinae. The title of the album refers to the concept used to calculate its orbit.

Content: The concept sounds complex, but fascinating and that’s rather symbolic for the sound of Spherical Disrupted. Hentrich uses different influences, which are mainly electro-ambient and IDM-inspired. It ends in a dark reverie sound driven by a slow cadence and, which might remind you of early Delirium.

You clearly notice the fascination of the musician to create and transform sounds while most of the songs are characterized by wafting synth parts. Some menacing bass lines are a bit EBM-orientated, but in the end it all remains rather IDM and ambient-like.

The last song is an interesting and somewhat different cut, which is a remix by Mortaja.

+ + + : I’ve always liked Spherical Disrupted for composing a very own sound approach, which is hard to classify. All influences together create an interesting range of sounds. The main influences remain ambient-like, but I especially like the intelligent approach driven by slow cadences and a terrific sound management. The remix of “Orbital Eccentricity” is a real great apotheosis to this work.

– – – : I can say that I’ve already heard better work from Spherical Disrupted. A few songs indeed can’t totally convince me, but globally speaking this band remains worthy of examination.

Conclusion: Time goes by, but the talent of some artists simply remains! Spherical Disrupted is totally back on track and all fans will be pleased to discover this new and intelligent opus.