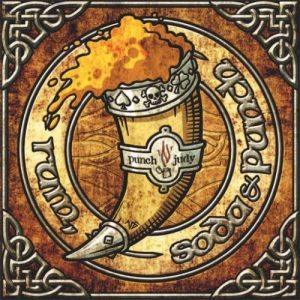 Background/Info: Punch ‘n’ Judy is a German formation, which is already active for a couple of years now. They previously released 3 studio albums (the last one has been produced by Carlos Peron) plus one live album. They now joined hands with Danse Macabre to unleash their newest work.

Content: Folk is just one of their main influences and for sure the most characteristic element from their sound. But next to the folk input accentuated by accordion Punch ‘n’ Judy also finds their inspiration in the realms of metal, punk, medieval and simply rock music. The folk input makes it just more exciting and accessible. It sometimes sounds a bit like they created a hybrid between The Pogues and Rammstein.

The songs sound like having been composed to play in bars where there’s a real fusion between musicians and audience. Most of the songs are sung in German, but you also will notice a few English lyrics.

The last song is an instrumental version of “Neptune”, which also is one of the main tracks of the album.

+ + + : I can’t say that this work is fully original although captivating. This is party-music mixing different genres together and that’s precisely what makes “Rum, Soda & Punch” accessible. The folk sound of an accordion makes the music entertaining and is like polishing rougher genres like metal and punk. “Neptune” is a potential hit, which will incite you to dance and simply have fun. The music of Punch ‘n’ Judy is hard, but entertaining like bringing people together. That’s for sure the real power of music!

– – – : I regret some of the songs aren’t that much into folk. It’s the real strength of the band, which is sometimes lost throughout more metal- and rock driven cuts.

Conclusion: The title of the album clearly indicates what it’s all about; pure fun and that’s for sure one of the main reasons why people like folk-inspired music. I can imagine this is the kind of music that will get a good live reputation.

Since you’re here … … we have a small favour to ask. More people are reading Side-Line Magazine than ever but advertising revenues across the media are falling fast. And unlike many news organisations, we haven’t put up a paywall – we want to keep our journalism as open as we can. So you can see why we need to ask for your help. Side-Line’s independent journalism takes a lot of time, money and hard work to produce. But we do it because we want to push the artists we like and who are equally fighting to survive. If everyone who reads our reporting, who likes it, helps fund it, our future would be much more secure. For as little as 5 US$, you can support Side-Line Magazine – and it only takes a minute. Thank you. The donations are safely powered by Paypal.
Tags: Punch ‘n’ Judy