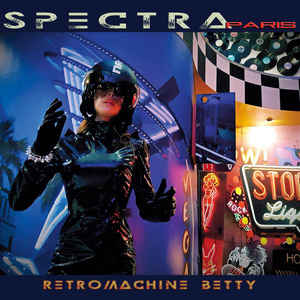 Background/Info: Spectra*Paris is back after a hiatus of 7 years! Kirlian Camera singer Elena Alice Fossi has joined hands together with Dependent Records to release her fourth full length. While Elena did most of the work, playing most of the instruments and of course singing, she also got some help from her partner in crime Angelo Bergamini and producer John Fryer (Depeche Mode).

Content: “Retromachine Betty” sounds as a ‘vintage’ title while the cover of the album rather looks futuristic. The music is a bit comparable to this vision; it’s definitely a kind of electro-pop music featuring vintage elements and references although mixed with a very own sound flavor, which is hard to catch.

Some passages are clearly into Kirlian Camera, but there always is a crazy touch on top. The opening song is suddenly featuring lyrical passages of Mike Oldfield’s “Moonlight Shadow” while “You Really Got Me” is a kind of free interpretation and wink to the famous song of The Kinks. And “Metrolynx” ends with pure retro-like synth sounds as an ode to Kraftwerk.

But behind this somewhat crazy concept and interpretation you can also find a pleasant electro-rock-pop format featuring sensual vocals and noticeable songs.

+ + + : This is a totally unusal release, which is not that easy to define, but definitely related to electro-pop with some rock inspiration on top. It sounds fun and totally free from established music standards. Spectra*Paris is also revisiting some ‘classical’ songs and bands, but in a very own and original way. I like the vintage aspect supporting most of the songs while Elena’s timbre of voice remains one of the main strengths of this work. There’s not only this sensual way of singing, but it still feels elegant.

– – – : It never has been that easy to exactly define and seize the sound of Spectra*Paris and this new album doesn’t sound that different. It rather sounds as a sonic exorcism so in the end I’m sometimes missing some coherence between all songs.

Conclusion: “Retromachine Betty” sounds weird, sometimes funny and a bit like a sonic quiz where you’ve to search for sonic keys, which are evoking old bands and famous hits. In the end I would say it’s a kind of album that has been never done before!