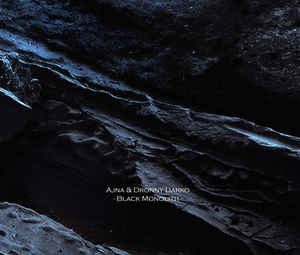 Content: “Black Monolith” sounds like cellar music. Long, buzzing vibes are crescendo wafting throughout a dark imaginary space. It’s interesting using headphones to fully distinguish the multiple, little noises in the background of the work. It sounds like pure ghost-music.

The new tracks are moving on there where the first disc stopped. There’s a slow progression towards an imaginary sonic inferno accentuated by diversified noises and field recordings. The dark atmosphere running through the final cuts becomes denser and you get the impression diving into an endless abyss habited by evil creatures.

+ + + : “Black Monolith” is frightening experience, kind of horror music for an imaginary movie or simply accompanying pictures of horror. The work has been meticulously built up and you especially feel the complementarily between both artists. I prefer the new compositions, which are more elaborated and diversified. The final pieces create a truly sound apotheosis and I especially want to mention “Amongst Unknown Species” and “Approaching The Unrevealed”. This album for sure has a strong visual appeal.

– – – : You really have to like this kind of music genre, which takes you away for an endless trip. Especially “1000 Years Of Cryosleep” which moves over the 40 minutes sounds a bit endless. “Black Monolith” is maybe a bit too long, but I guess the fans will not complain.

Conclusion: “Black Monolith” is the kind of work that will rapidly bring you into a dark and frightening imaginary world facing visions of terror. Both artists have created a sonic symbiosis and I can only encourage them to renew their common artistic creativity.

Since you’re here … … we have a small favour to ask. More people are reading Side-Line Magazine than ever but advertising revenues across the media are falling fast. And unlike many news organisations, we haven’t put up a paywall – we want to keep our journalism as open as we can. So you can see why we need to ask for your help. Side-Line’s independent journalism takes a lot of time, money and hard work to produce. But we do it because we want to push the artists we like and who are equally fighting to survive. If everyone who reads our reporting, who likes it, helps fund it, our future would be much more secure. For as little as 5 US$, you can support Side-Line Magazine – and it only takes a minute. Thank you. The donations are safely powered by Paypal.
Tags: Ajna & Dronny Darko, Monolith, terror