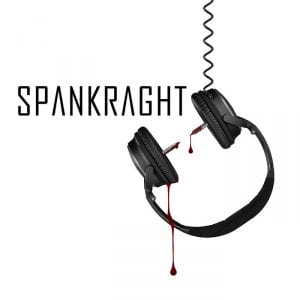 Content: Spankraght deals with an atypical sound, which is mainly driven by metal guitar riffs, fast rhythms and rather unexpected electronic treatments. Most parts remain instrumental, creating a kind of cyber-metallic soundtrack approach. But I also noticed some whispering vocals with effects on top and spoken sampled parts.

+ + + : “Spankraght” sounds like a sonic challenge. It might appeal to metal lovers, but can still ravish electro-heads who’re open for something different. In the end I can speak about an apocalyptic and somewhat visionary soundtrack style, which might be suited for some games. The metal power is for sure the main strength and characteristic, but the last song also reveals great electronic arrangements. Last, but not least I also have to say a word about the cool digipak artwork.

– – – : I can’t get away from the idea that a challenge also means a risky business. Spankraght is trying to match opposite influences and even if it’s original I’m missing cohesion between guitar and electronics.

Conclusion: It all feels like this band is sitting in between two chairs and doesn’t really know which one to choose… metal or electronic. The answer is quite simple: this is a metal band, which now has to find the right balance with their electronic part.