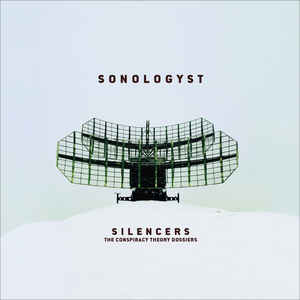 Background/Info: Italian artist Raffaele Pezzella is already involved with experimental music for numerous years now. Active under the Sonologyst moniker he’s also running Unexplained Sounds Group and Eight Towers Records, both label devoted to the darkest- and most experimental formats of ambient- & industrial music. “Silencers” is a kind of sonic documentary that was originally released in 2015 and now re-edited on CD by Cold Spring.

Content: The sound universe of this experimentalist is featuring multiple influences and is therefore much more than simply experimental. But first of all this album is based around a concept dealing with ‘the silencers’ or ‘Men In Black’ who are related to the conspiracy theories and plots. It’s a theme leading to the transposition of astral signals and other mysterious noise sources. Electronic manipulations and guitar experiments have been merged together, but you also will hear electronic minimalism, extract of speeches dealing with the subject.

+ + + : Sonologyst dealings with a very personal approach of experimental music. He brings different influences together, which move from extremely experimental to more accessible electronic loops. And one of these loops running through “Nocturnal Anomalies” is absolutely irresistible. Every single track sounds like a new sonic goal, which injects a cool diversity in the work. I realized that the Sonologyst sound  totally fits with the concepts  Raffaele Pezzella is dealing with: totally enigmatic! Some of the tracks (and I especially refer to “Secret Societies. The Kennedy Speech”) create a truly paranoiac sensation, which mixed with the dark sound treatments became freaky frightening.

– – – : I got the feeling some tracks could have been a bit more elaborated or more accomplished. The abrupt end of some cuts is an example of this somewhat rough approach.

Conclusion: Sonologyst walks on a dangerous path filled with mysteries people never have found the truth about. That’s the point where conspiracy theories saw the daylight, which are the main source of inspiration for Sonologyst.

Since you’re here … … we have a small favour to ask. More people are reading Side-Line Magazine than ever but advertising revenues across the media are falling fast. And unlike many news organisations, we haven’t put up a paywall – we want to keep our journalism as open as we can. So you can see why we need to ask for your help. Side-Line’s independent journalism takes a lot of time, money and hard work to produce. But we do it because we want to push the artists we like and who are equally fighting to survive. If everyone who reads our reporting, who likes it, helps fund it, our future would be much more secure. For as little as 5 US$, you can support Side-Line Magazine – and it only takes a minute. Thank you. The donations are safely powered by Paypal.
Tags: Sonologyst