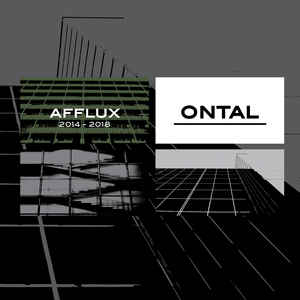 Background/Info: Serbian duo Darko Kolar – Boris Brenecki have released an impressive number of EP’s and 2 full lengths plus an album together with Dronelock. “Afflux” is not exactly a new opus, but a fine selection of songs the band released in between 2014 and 2018 on vinyl.

Content: Ontal deals with progressive industrial music, which features multiple other influences. The fusion with techno music is quite evident, but these tracks also reveal several cuts carried by solid EBM-like bass lines. A few other cuts have been mixed with acid treatments.

The last tracts are remixes by Geistform, New Frames and Unhuman.

+ + + : I’ve been familiar with the Ontal sound for several years now, but I didn’t know all of their EP’s. And I must say there are some real nice surprises featured on this work. I especially like the fat EBM bass lines running through songs as “Combast Engineering” and “Taphonomy”. The acid sequences are pretty cool as well, revealing the open-minded spectrum of this formation. Ontal stands for an original and refreshing industrial format. I wasn’t surprised that they asked another visionary artist such as Geistform to remix one of their songs and here again it’s a brilliant version, which stands for intelligent dark-techno music. The remix by New Frames is another noticeable cut.

– – – : As on most releases there’re a few cuts, which can’t totally convince for being unaccomplished.

Conclusion: This album is a kind of ‘best of’ featuring songs that were previously released on vinyl. This CD format is an opportunity to discover little sonic treasures so in the end this is for sure my favorite Ontal album so far.