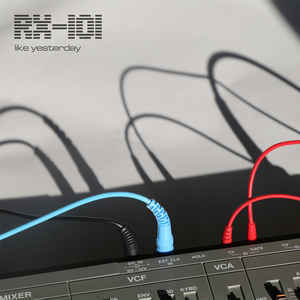 Background/Info: Erik Jong is an artist hailing from The Netherlands. He released 2 other EP’s on Suction Records (label of bands like Lowfish, Solvent, Digital Poodle ao).

Content: The songs feature two main influences. On one side there clearly is a techno driven source of inspiration while on the other side RX-101 clearly likes to experiment with sounds and atmospheres.

It sounds a bit vintage-like, which is an element that also comes through in the somewhat melodic approach. The cuts are still pretty space-like, but there also is a solid experimental and sometimes even glitch exposure.

+ + + : “Like Yesterday” is hard to define as music style properly speaking, but rather sounds as the symbiosis between different influences. The techno touch makes the experimental style more accessible while the retro-electronic sounds give you the impression to hear an early and somewhat visionary techno production. The tracks have been accomplished by impressive studio effects and cool production tricks. If you consider this album as purely experimental you’ll have to admit that it’s a fascinating production featuring several cool songs.

– – – : It’s often the same observation; the strongest aspects of an album often are the weakest ones as well. Bringing techno- and experimental music together is not an easy thing and rather a hard challenge, which for sure will not please all lovers of techno music nor experimental stuff.

Conclusion: RX-101 belongs to this growing number of avant-garde techno artists who clearly are into a new dimension of music, which no longer belongs to the established techno formats. This artist comes from the future!