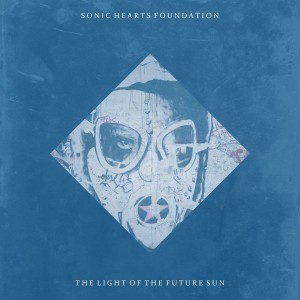 Content: This is a band hailing from Glasgow, and a name you’d better keep in mind. Anthony Henderson, Brian Crawford, Thomas Crawford and Jim Brown are Sonic Hearts Foundation and the least I can say is that this new band masterly brings the spirit of 80s new-wave music back to life.

The opening song is a kind of crystalline goth song carried by beautiful, dark atmospheres. “Kingdom Of Fear” coming up next moves into power and mewing guitar playing reminds me of the glorious days of UK bands like The Sisters Of Mercy, Echo & The Bunnymen and Virgin Prunes. This is pure nostalgia, but composed with maturity and a true spirit.

“Berliner (Radio Edit)” is a next piece to keep in mind, and especially the 4th and final song “Augustus” is an overwhelming piece of new-wave inspired music. The band calls it ‘alternative dark post-rock’, but whatever the label you want to put on it, this is a brilliant composition driven by simply, but carrying chorus while the guitar playing again reminds me of the glorious days of new-wave music.

Conclusion: I’m confident Sonic Hearts Foundation will quickly find an interested and professional label to release their work. This is one of the biggest revelations of the year in new-wave/gothic music and still one of the best albums I’ve heard.