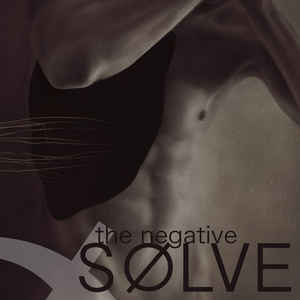 Background/Info: Behind this project is hiding Brant Showers who’s mainly renowned for his involvement in ∆Aimon. Sølve is another project, which unleashed its debut work on the visionary Audiotrauma label.

Content: “The Negative” is an atypical industrial release, which is clearly inspired by heavy industrial elements, but still explores other sonic paths. It’s an interesting voyage that will lead us towards tribal influences, neo-classic piano-like arrangements, subtle bombastic passages and even a kind of industrial trip-hop experience. The electro-industrial element is quite accomplished and reveals an impressive sound arrangements.

The vocals are quite diverse as well. It now reminds me a bit of Depeche Mode (cf. debut song) while other passages are more into a whispering format and fragmented parts. The album also features a few instrumental parts accentuating the versatile format of the album, which remains pretty compact.

+ + + : Just like on the ∆Aimon project this is an original and fully artistic composition. There’s a great progression running through the songs while some tribal elements are simply genius. The debut part of the album is really close to perfection. There’s a judicious balance between heavy, bombastic and industrial elements at one side and refined arrangements at the other side. “The Negative (Perspective 1)” and “What Remains” both a masterpieces.

– – – : The debut part is amazing while the final part of the work is not exciting and quite different. That’s a pity otherwise it would have been an album that comes close to perfection.

Conclusion: Sølve belongs to a new generation of industrial artists, who are more into elaboration and the mix of multiple influences. This is another noticeable release on Audiotrauma.