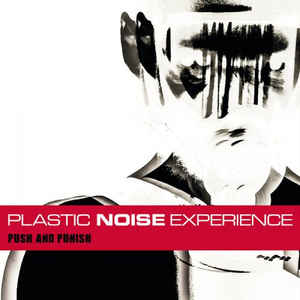 Background/Info: Plastic Noise Experience is one of those legendary 90s EBM bands from Germany, which needs no further introduction. PNE have released an impressive list of ‘hits’ during their early years, but since their comeback in 2004 Claus Kruse didn’t stop surprising his fans with successful productions. The last album “Therapy” (2014) was a kind of back to the source revealing a harder and more aggressive EBM style reminding me of the early years.

The song “Push And Punish” has been one of the biggest hits of this album and now became the main focus of this vinyl release. The entire “Therapy”-album featuring 11 songs has been reworked by Claus Kruse into so-called ‘vinyl mixes’ while the CD joined to the vinyl reveals 8 extra remixes. Notice by the way that the digital format features 6 more remixes.

Content: If you know the “Therapy”-album this release will have no real surprise for you. “Push And Punish” holds on to the hard and EBM influence, which for sure reminds me of the early years of the band. This is a wink to hits like “Kill The 6”, “Gold”, “Reduction” ao. You’ll easily recognize the unique and familiar PNE influences made of bombastic drum sections, deep sounding bass lines, dark leads, sophisticated bleeps and the alluring, growling vocals by Claus Kruse.

“Push And Punish” remains one of the absolute highlights for its hard-hitting EBM sequences and carrying chorus, but I also have to mention the more sophisticated “Chapter Five” and the old-styled “Electronic Bodies”.

Among the remixes you’ll discover Orange Sector, Nordarr, MRDTC, Akalotz and T.H.Industry as the most familiar names, and also Citric Acid, Die6 and Solarpowered Vampyre. Most of the bands really did a great and inspiring job, but I especially have to mention the wafting feeling running through the remix of “Last Call” by Solarpowered Vampyre.

+ + + : This album reveals an interesting alternative album to the “Therapy”-content. The early and hard-EBM sound of PNE has been brought back to life and you really can feel the original magic of this great band. The vinyl format is an extra ‘vintage’ element that will appeal for the oldest fans of the band.

– – – : It’s a pity this album doesn’t reveal any real new material. This is first of all an album for the die-hard fans of PNE.

Conclusion: “Push And Punish” is not really that new, but it stands as a cool alternative version to the original album. It also confirms Plastic Noise Experience as a band with unique sound DNA.

Since you’re here … … we have a small favour to ask. More people are reading Side-Line Magazine than ever but advertising revenues across the media are falling fast. And unlike many news organisations, we haven’t put up a paywall – we want to keep our journalism as open as we can. So you can see why we need to ask for your help. Side-Line’s independent journalism takes a lot of time, money and hard work to produce. But we do it because we want to push the artists we like and who are equally fighting to survive. If everyone who reads our reporting, who likes it, helps fund it, our future would be much more secure. For as little as 5 US$, you can support Side-Line Magazine – and it only takes a minute. Thank you. The donations are safely powered by Paypal.
Tags: EBM, MRDTC, Plastic Noise Experience, PNE