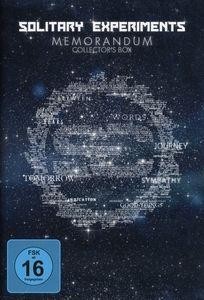 Content: “Memorandum” is an appropriated title to celebrate the 20th anniversary of Solitary Experiments. I discovered the German formation during the late 90s and their first official album (cf. “Final Approach”) released by the now gone Maschinenwelt Records.

Solitary Experiments immediately sounded as a promising newcomer and during the years they only increased their popularity to become a recognized formation.

This box is an interesting move back in time featuring their debut work “Risque De Choc Electrique” originally released on cassette (!) format in 1996 and revealing 13 songs. It’s a real fascinating work reflecting the flavor of the 90s German EBM scene. I often get the impression of hearing a symbiosis between bands like Der Prager Handgriff, Calva Y Nada and Terminal Choice. There clearly is an explicit 90s EBM influence running through the songs. It was not all that original, but Solitary Experiments clearly reveal their early influences and their great talent as ‘copyists’.

Songs like “Fernes Land” and “Dein Fleisch” evoke the typical dark electro style of Calva Y Nada while “Guardian Angel” sounds more in the line of Der Prager Handgriff. “In Ewigkeit” reminds me to the early work of their hometown mates Terminal Choice. But I also have to mention the title song and “Die Seuche”, which both are clearly electro-like, and have a vague gothic touch.

All I can say is that this (remastered) album definitely deserved to be released on CD format. I’m sure it will please lovers of the 90s EBM movement.

The 2nd disc features 14 ‘classic’ songs of Solitary Experiments revisited by the remixing skills of great -and sometimes forgotten, names of the scene. Solitary Experiments always have been big lovers of remixes so this “Memorandum” has to feature this disc. It’s a way to remind us of some great –and mainly leading bands of the 90s, formations like T.O.Y., Trial, In Strict, Decoded Feedback, The Eternal Afflict, XMTP, Steril, Robotiko Rejecto, Syntec, Robert Enforsen (Elegant Machinery), Dirk Riegner (Secret Discovery), but also Psyche and Mesh. This is an impressive and great list of bands.

It’s hard to give you favorites, but I was impressed by the opening remix of “Epiphany” by Mesh. The harder and into EBM styled remix of “Game Over” by Steril is the next highlight. The Eternal Afflict did a great job as well, transforming “Odyssey Of Mind” into a somewhat Covenant-like version. Trial did an amazing job remixing “Rise And Fall” into a fully accomplished piece of intelligent EBM.
The most surprising remix for sure is the piano-like treatments of “Do You Feel?” by Dirk Riegner.

Last, but not least the 3rd album “Heavenly Symphony” has been remixed as a single CD and shows Solitary Experiments going symphonic. Eight famous songs of the band have been reworked into symphonic versions and the least I can say is that it left me breathless. It simply sounds amazing to see those original songs of pure electronics getting reworked this way. It all sounds pretty cinematographic and refined by delicious piano arrangements and heavier epic arrangements. The vocals have been sung and produced a in real passionate way, which appears to be great match with the orchestral style.

I like the symphonic versions of “The Edge Of Life” and “Epiphany” while “Immortal” and “Beg Your Pardon” both are more into a soundtrack approach. The more explicit piano-minded “Trial And Error” sounds more delicate, but still surprising as well. I’m not sure all fans of the bands will fully enjoy “Heavenly Symphony”, but it clearly sounds like a work that pleased the band.

Notice by the way this box also contains a DVD, which we unfortunately didn’t get, but it’s for sure a nice bonus for the fans of Solitary Experiments.

Conclusion: This box is an interesting celebration of Solitary Experiments. It’s a surprising production and in my opinion much more original than the usual and typical ‘best of’ release.