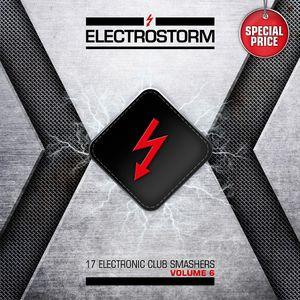 Content: Out Of Line has placed some of its finest and most famous electronic acts at the top of the electronic scene. This new assault, which also is the 6th volume in the appropriated series “Electrostorm” sounds as a total dancefloor blitzkrieg!

This new volume features 17 bands from the Out Of Line roster. Next to some of the most famous bands and flag holders, this new edition reveals interesting newcomers like The Sexorcist, Tanzresonanz (new side-project of Agonoize), Sleepless In Pyongyang (ex Din (A) Tod), Massive Ego and Dear Strange.

This successful series again reveals many outstanding songs, but you’ll be pleased to hear that there’s some previously unreleased material here. Suicide Commando unleashed a new song called “My New Christ”. It’s not my favorite cut from the Belgian master, but the song reveals cool sound treatments and the familiar icy treatments. If you already heard the new EP of Hocico you for sure will agree that “In The Name Of Violence” is a murdering hit by those Mexicans.

Another flag holder is Blutengel, which took me by surprise with the cool and intelligent wave-pop song “Not Me (Leave In Silence)”. This is an excellent dancefloor killer! Speaking about pop there also is the magic “Monument (Edit)” by Angels & Agony. I really love this song, which is a real masterpiece featuring a sublime apotheosis by a children choir.

Combichrist doesn’t need any further introduction, but doesn’t bring that much new. Their latest big hit “From My Cold Dead Hands“ has been featured as a new remix by Ginger Fish feat. Disco Death Rock. It remains a great and powerful song and even if this is a new remix it doesn’t really add that much new.

Let’s take a look at the ‘new’ bands. The Sexorcist comes up with a cool and EBM-minded German sung track, which is pretty interesting. Sleepless In Pyongyang sounds rather body-pop like and is not bad at all. The most surprising and for sure original newcomer is Dear Strange for its rather theatre-like electronic sound.

Last, but not least I also want to tip Ashbury Heights and Chrom, which in my opinion both remain some of the most talented and maybe less recognized bands from the Out Of Line stable.

Conclusion: The “Electrostorm”-series remains total guarantee for great electronic music and always remind us why Out Of Line is one of the uncontestable leading labels of underground music.