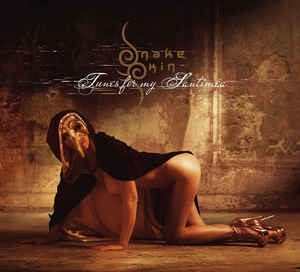 Background/Info: Tilo Wolff and Lacrimosa both are inseparable, but I’m sure some of you will probably have forgotten Snakeskin. This other project driven by Tilo Wolf released two albums (cf. “Music for The Lost” and “Canta’Tronic”), but the last opus got released in 2006! “Tunes For My Santimea” is a kind of comeback for Tilo Wollf who’s in the real good company of two great female singers (cf. Kerstin Doelle and Carina Boehmer). Kerstin Doelle was already singing on “Canta’Tronic”.

Content: The link with Lacrimosa is always easy to make although this new work is more into a kind of neo-classic spirit. The beautiful and artistically trained vocals –especially of Kerstin Doelle, elevate this work towards a higher level. But the work is not only the heavenly voices of the singers, but also the great composition.

Snakeskin moves from hard and dynamic songs to beautiful, sad atmospheres. Orchestral arrangements were mixed with refined sound treatments. The songs are now delicate and next bombastic-like while I can perfectly imagine some of the tracks being used on a soundtrack.

The album features 10 tracks plus 2 remixes

+ + + : “Tunes For My Santimea” is a versatile, but artistic composition. There’s a beautiful duality between both female singers while Tilo Wolff’s vocals are just accentuating the contrast… or accomplishing the complementarity between all protagonists. It’s hard to consider this work as any particular genre rather than the synthesis between multiple influences. Electronics and neo-classic influences join hands for a transcendental creation revealing several attention grabbers. I also have to mention a great club-remix of “Take Me Now” by Kartagon. Last, but not least I have to say a word about the great artwork of the album, which reminds us that a physical release still remains the unique format that would please real music lovers.

– – – : This album is too beautiful and accomplished to really consider finding minus points. I would just add that the final part of the opus is not as exciting compared to the phenomenal debut.

Conclusion: Snakeskin strikes back in style and with an impressive artistic achievement. Should we really expect it different when it involves Tilo Wolf?