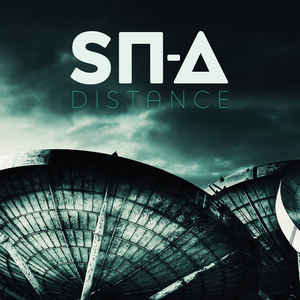 Background/Info: Sevren Ni-Arb will be forever linked to X Marks The Pedwalk. But the legendary EBM artist and producer has been involved with numerous other projects like Scarecrow (early project), Ringtailed Snorter, A-Head, Hyperdex-1-Sect, Pax, U-Tek ao. SN-A which stands for the initials of the artist, is his latest side-project he set up a few years ago now releasing the debut-album “Transmissions” (2013). SN-A is now back on track unleashing a new full length released on the artist’s own label.

Content: I spontaneously would say that “Distance” moves on there where “Transmissions” stopped. There’s a similar approach in sound and influences, revealing electro-ambient instrumental compositions. The songs are carried by slow cadences and achieved with omnipresent space bleeps and –atmospheres.

“Distance” sometimes reminds me to recently released work of Jean-Michel Jarre without becoming too close. The last part of the work reveals some remarkable songs, which are even a bit ambient-pop like.

+ + + : “Distance” is a beautiful electro-space walk filled with reverie, but also revealing a more personal and intimate exposure of this German sound architect. You can’t compare SN-A with X Marks The Pedwalk, but from a pure technical point of view, I experienced this album as more creative. There’re a few brilliant songs featured at “Distance” and I especially want to tip “Noise Radar” and “Origin”. Both songs reveal phenomenal sound treatments, alluring bass lines and subtle arrangements.

– – – : From a very personal point of view I would have liked a few passages with spoken vocals and/or samplings. But the main challenge for SN-A remain for sure to catch the attention of a ‘wider’ audience.

Conclusion: I already liked the debut album of SN-A and “Distance” only confirms the great sound and music approach of this project. This is a fully accomplished and intimate work inviting listeners for a delicious sonic trip.