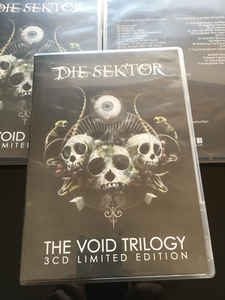 Background/Info: Next to the release of the album (DCD) “To Be Fed Upon Again” Digital World Audio also re-released “The Void Trilogy”. It concerns the albums “Applied Structure In A Void” (2011), “The Final Electro Solution” (2012” and “(-)existence” (2013). We already got “The Void Trilogy” released in 2015 featuring the aforementioned albums plus the latest Die Sektor-opus “From Out Of The Void”. We now get a ‘new’ limited edition of 105 copies containing bonus tracks and released in a DVD case featuring a 20 paged booklet.

Content: This is an opportunity not only to rediscover these 3 albums, but also to realize the evolution in sound from one album to another. “Applied Structure In A Void” sounded in the continuation of “To Be Fed Upon”, but still featuring harder, industrial and sophisticated compositions. The vocals were also harsher and more into a screaming modus. The songs were accomplished with heavy sound blasts and the familiar tormented sound atmosphere hanging over the production. Die Sektor also went on composing a few instrumental and more cinematographic passages.

“The Final Electro Solution” appeared to me as an album opening a window upon other sonic paths. It’s a complex and sometimes ‘difficult’ work, which might remind to early industrial Skinny Puppy releases. It’s hard and sometimes into bombastic arrangements.

Last, but not least “(-)existence” moved on there where “The Final Electro Solution” stopped. It’s another overwhelming production revealing solid leads, pumping kicks and still a few experimental passages.

Each album feature bonus tracks, which are often instrumental and therefore more soundtrack-like. It reveals another side of Die Sektor, which has been always present since their early works.

+ + + : I think it’s a good idea to have brought all these albums together. You can see the progressive evolution in sound and influences. The early work was more into Suicide Commando influences while Die sector moved towards more complex and Skinny Puppy-like industrial music. But I never have considered this band as copyists. They clearly have found an own sound, which because of the sophisticated writing might appeal for Skinny Puppy-lovers. I like the overwhelming sound mixing industrial power together with bombast and solid leads. But Die Sektor also dared to explore more experimental fields, resulting in filtered sequences, which aren’t that typically dark-electro-like. “(-)existence” is without a shadow of a doubt my favorite album from this trilogy for revealing a mature and intelligent although sophisticated production.

Last, but not least I’ve to say a word about the artistic booklet while this limited edition might be seen as a collector’s item.

– – – : I’m not convinced at all by the bonus tracks, which clearly sound as songs that were not good enough to get released on the original album versions.

Conclusion: The complete album-discography has been now re-released and re-re-released so I think it’s time now for something different!