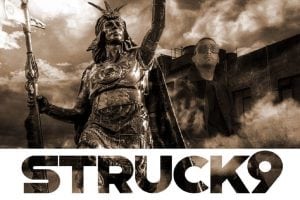 I’m always interested to discover new bands, but especially artists from countries and parts of the world you don’t immediately link with electronic underground music. Struck 9 is a Colombian duo set up in 2008 by Andres Orion and Andres Henker. They released the “Democracy”-album in 2010 on Black Leather Records (Colombia). It took a while to accomplish a new opus, but here it is! “Ritual Body Music” has been released by EK Product and will catch the attention of all old-school EBM lovers. Master mind Andres Orion answered a few questions.

Q: A traditional question to take off is to know how Struck 9 saw the daylight, the meaning of the band name and what have been your musical references and sources of inspiration?

Andres: Struck 9 was the first EBM song I heard in 1993 by Anstalt so I named my band that way to honor them. We are inspired by 80s and early 90s EBM, new-wave and post-punk.

Q: It seems there’s a real electronic underground scene in Colombia. How does it looks like regarding bands, labels, distributors, concerts/festivals, parties etc?

Andres: To be honest, there are a lot of parties, but not that many concerts and there’re a few distributors. The technical conditions for a festival are minimal and nobody risks losing money.

Andres: “Democracy” got a great recognition and had a serious impact, inspiring new bands and movements in Latin America. We played live in Colombia and Peru. After that I spent years working and learning music production and Sound Art. While Henker was dedicated to working as a brewer, the realization of “Ritual Body Music” took 4 years to get achieved… Good things take time.

Q: Tell us a bit more about the meaning and composition of “Ritual Body Music”? What kind of album did you want to accomplish and what are the elements of the album you’re proud of?

Andres: We wanted to break the standards so we integrate traditional elements of some ancestral cultures like shamanic icaros and sacred chants. In the ancestral rituals the dance has a purpose, we perceive EBM as a congregation, a tribe in a search for rhythm and sound vibration to reach other levels.

Some of the percussion was made with recyclable materials like real pipelines. On the song “Kapital” you can hear guest artist Gabriel Ortiz who built his own instruments with trash.

Q: Your new work has been released on EK Product. What does it mean to you to get signed on an European label and what might we expect from Struck 9 during the further months/years?

Andres: EK Product has been a great reason to grow up and learn even more about European music culture. Now we can´t stop writing new music. This is just the beginning…