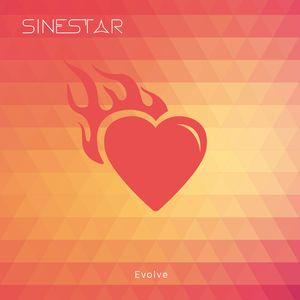 Content: The opening song “Ready Set Go And Die” is the best way to get introduced to the magic and irresistible sound of this British formation. This song is the perfect mix of electro-wave-pop and indie-pop music. It sounds ultimately catchy, powerful and dancey. This is transcendental pop music lead by a passionate singer. I honestly was a bit scared to hear what would come next after such an outstanding opener.

I can assure you “Evolve” will be one of the absolute ‘top’ albums of the year. Sinestar sounds a bit like the offspring between Apoptygma Berzerk and Mesh. I guess it’s not exactly of a coincidence if a few songs were produced by Richard Silverthorn. This band deals with passion and is accomplishing their songs with impressive catchy arrangements. There also is a retro touch, which at the softer songs reminds me of OMD.

There are several potential hits, which are following each other in a furious cadence. From “The Madness Of Control” to “The Same Way” to the previously released EP-track “Fortunes Faded” to Falling” to “Chemical Romance” and the extremely beautiful “Sentinel” this album sounds like the ultimate gift even for demanding pop lovers.

I really dare to say that this album is one of the best releases I’ve heard in the entire history of electro & wave-pop music. The production reflects maturity and the song writing have been accomplished by knowledge and this little touch of genius which makes the difference between average bands and great bands.

The 2nd disc features the entire EP “Fortunes Faded” although some versions are a not that different. Next to the “Original Version” of the title song you’ll get 10 remixes. There’re excellent remixes among the tracklist, but I’ll especially mention the work of Republica, Parralox and Oren Amram.

+ + + : The global elements of the production are simply outstanding. From the passionate vocals to the elevating choruses to the perfect balance between electronics and guitar to the transcendental breaks played with real drums to the alluring bass lines, this work smells like the ultimate release in the pop genre.

– – – : The only minus point I can figure out is the EP and its endless number of remixes from one, single song. I think there are more songs on the album that could have been remixed.

Conclusion: If this album would have been released let’s say 10 years ago Sinestar would have become without a shadow of a doubt an absolute leading formation in their genre. Sinestar hasn’t invented perfection, but they have the genius to get close to it.