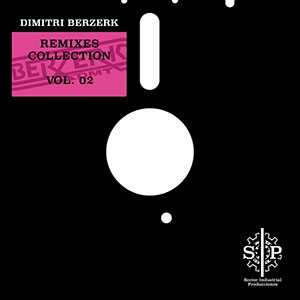 Background/Info: Dimitri (DMT) Berzerk is a Mexican DJ and producer you for sure already discovered by one of his endless remixes he made for other artists. He started assembling these remixes on albums and has unleashed the second volume in the “Remixes Collection”. The CD format is strictly limited to 200 copies and has been released on his very own label.

DMT Berzerk seriously reworked the songs into mainly electro-pop driven edits, but he also added or hold on EBM influences on other cuts.

+ + + : Making remixes is a long-time habit in different music genres, but the interesting element about this artist is he has some particular skills to do the job. It’s not just a remix that has been made in a hurry, but you can feel a real sound approach and I dare to say ‘sound philosophy’ behind the remixes. Even if most of the songs have been restyled into danceable and sometimes clubby electro-pop, I also noticed a few surprising songs such as the minimal remix of Wumpscut’s “Wreath Of Barbs” and the trance vibes that have been held on at Kromak’s (side-project C-Lekktor) “Dying 4 U”. There’s a great diversity, which sometimes moves at the edge of electro-ambient and then becomes pretty vintage-like, but globally speaking there’s a real coherence between all remixes.

– – – : This is a fully enjoyable and entertaining album, but maybe without absolute hits although multiple tracks for DJ’s.

Conclusion: I’ve never fond of remixes, but this kind of concept is different. I think it’s a damned good idea to get the remixes Dimitri Berzerk made for others on one disc.