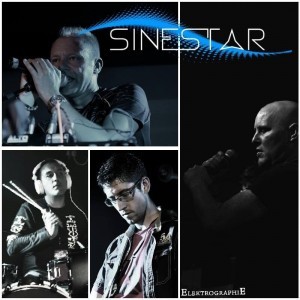 Conzoom Records is a synth-pop label with a nose for talented electro-pop bands. Think about bands like Parralox, Dual Density, Future Perfect, Vision Talk, Zynic.. but the newest revelation and maybe next sensation on ‘planet pop’ is the British band Sinestar. Their official debut album “Evolve” is an impressive and professional production, which makes me think to the offspring between Apoptygma Berzerk and Mesh. I’ve been deeply impressed by their sound and got in touch with Mark Trueman.

Q: Can you briefly tell us something about your musical background and influences plus the way you met and set up Sinestar?

Mark: Sinestar formed in 2011 following the break-up of a previous project, Jagged. Four members from that band, Mark Trueman, Iain Brownlie, Steve John and Mathew Mohangee, went on to form Sinestar with a view to create a more accessible and electro-pop focused sound. We were joined by new bassist, James Skuse. Steve John appeared on our first releases as a guitarist but left in 2013 and the guitar was picked up by singer, Iain.

Our musical influences are varied across the band members. I was primarily a synth/electronic music fan with Gary Numan and Vince Clarke as my primary influences. Mathew is a superb drummer who has played in many differing genres including rock, jazz and pop. He brings a dynamic to our live sound that has been applauded by our audiences. James is the youngest member of Sinestar and brings a solid bass style that suits our sound with influences from the UK indie scene. Iain Brownlie grew up in Manchester and was inspired by bands such as Joy Division and New Order. Later he got into the whole Manchester scene and fronted some successful indie bands before finding his niche in Sinestar.

Q: Tell us a bit more about the multiple ‘pop’ influences running through your work and the way you accomplished the “Evolve”-album?

Mark: “Evolve” is essentially a pop album. The idea was to create a piece of work that we could all be proud of. Each track would start with Me creating a basic song template. Iain would then apply lyrics and start to create melodies to complement the feel of the track. I wouldn’t say that any of the individual tracks had specific influences but obviously, there are sounds and production techniques that can be heard on many electronic music tracks.

Q: How did you get in touch with Richard Silverthorn (Mesh) and what has been his impact on the few songs he produced on “Evolve”? Why did he only produce a few tracks?

Mark: We have been friends with the guys from Mesh for a number of years, and have supported Mesh on many occasions both in the UK and in mainland Europe. We live in the same area in the UK and often pop into Rich Silverthorns studio for a coffee! Rich offered to produce some tracks for us for a limited run EP. These three tracks, “The Same Way”, “Fortunes Faded” and “Running Home”, later appeared on the “Evolve”-album. We were incredibly grateful to Rich for his time on these tracks, and also his help and guidance. “Evolve” was the first album produced by Me and Rich’s help was invaluable. We chose to produce the album ourselves as we wanted “Evolve” to be our sound and not someone’s interpretation of how we should sound.

Q: According to you what’s the main strength of the “Evolve”-album and what are the element(s) of your sound you still want to improve?

Mark: We have been told by fans that each track on “Evolve” could be a single. And that’s exactly what we wanted. There are a number of musical styles on the album. All synth based, but each track differs from the preceding one, which keeps the listener interested. Without doubt, having a vocalist as strong as Iain is a huge asset to Sinestar. His vocal range and craftsmanship of melodies do stand out. We do tend to create tracks that come under the label of ‘earworm’. It’s all about memorable melodies and making your foot tap! Most of all though, we’re all best mates who have a huge amount of fun creating music together and I think this is reflected in the album and our live performances.

We are all extremely proud of “Evolve” but as I said, this is the first album I’ve ever produced so there is still loads for me to learn and improve on I’m sure!

Q: What do you want to accomplish during the next few months?

Mark: Simply, to get “Evolve” heard by as many people as possible. We are looking to take “Evolve” on the road and hopefully, get back to some live dates in Europe. We are appearing in Lille, France in May 21st, in the ‘I-Synth 4’ festival and are looking for more dates. We have just appeared in ‘Electronic Winter’ in Gothenburg, Sweden which was an incredible night for us. We are also shooting a video for our next single over the next few weeks which we are extremely excited about. We continue to write on a weekly basis when we all meet up so there will be more material to come! Most of all though, we will continue having fun!