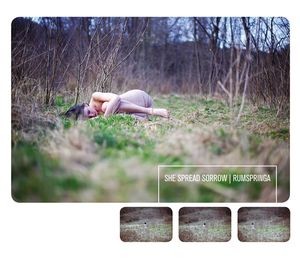 Content: Some of you will possibly know Alice Kundalini from her involvement in the heavy power-electronic project Deviated Sister TV. This Italian female artist also set up a solo-project called She Spread Sorrow and has joined the Cold Spring Records roster to unleash this debut album featuring 6 cuts.

The work takes off with dark vibrating sounds, which make me think of an ambient storm of noises and analogue-like manipulations. The work progressively evolves into harder passages, revealing the noise addiction of Kundalini. She’s one of the few female artists involved into this kind of sound. It’s an extreme, but fully enjoyable sensation if you’re into this kind of sound.

“Rumspringa” is a kind of imaginary sonic pot filled with boiling noises. The work is joined by echoing low tones and dark atmospheres plus the ghost-like vocals of Alice. The vocals are spooky and sometimes fragmented, which creates a nice twist with the sonic manipulations. It’s a disturbing sonic creation, which is reinforced by the artistic creation of the different pictures you’ll find in the digipak. It reflects feelings of loneliness and abandonment, but you also can feel some deeper and perverted themes as well.

She Spread Sorrow is not exactly a kind of ‘feel-good’ music, but that’s precisely what this kind of industrial & noise creation stands for. Kundalini calls it a ‘ritual deathscape’, which I think perfectly, symbolizes the sound she’s dealing with. This creation comes to climax and I dare to say a sonic orgasm at “Inertia Malaise”, and especially on “Chastity”. This last title feels a bit like the brutal intrusion of a young and innocent girl’s chastity. Bleeping signals have been lost in a fictive mouth of a sonic ogre while the spoken words accentuate the sensation of total despair.

The work comes to an end by one more spooky and noise-minded creation entitled “Seven Daughters”. The obscure atmosphere running throughout this song is quite representative of the global work.

Conclusion: “Rumspringa” is a fully accomplished debut work revealing the talent and I dare to say ‘noise-refinement’ of this Italian artist.

Since you’re here … … we have a small favour to ask. More people are reading Side-Line Magazine than ever but advertising revenues across the media are falling fast. And unlike many news organisations, we haven’t put up a paywall – we want to keep our journalism as open as we can. So you can see why we need to ask for your help. Side-Line’s independent journalism takes a lot of time, money and hard work to produce. But we do it because we want to push the artists we like and who are equally fighting to survive. If everyone who reads our reporting, who likes it, helps fund it, our future would be much more secure. For as little as 5 US$, you can support Side-Line Magazine – and it only takes a minute. Thank you. The donations are safely powered by Paypal.
Tags: She Spread Sorrow