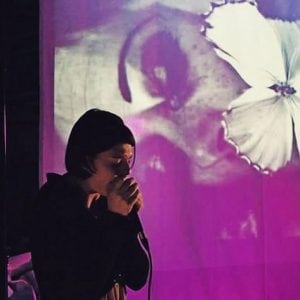 When you ask Alice Kundalini about the rather strange and intriguing name of her solo-project She Spread Sorrow she answers: ‘Sometimes in my life I felt like I was someone who spread pain and sorrow, and sometimes some people used these words about me. But after a hard period of my life, I choose to use this name, in the third person ‘she’ and not ‘I’, and in the past, not in the present. Like a cut. A point of restart’. After her debut-album “Rumspringa” (2015) and the “Mine”-vinyl album (2017) this Italian artist strikes back with the marvelous although somewhat ghost-like and tormented “Midori”-opus. All of her work has been released on Cold Spring and reveals a delicate and somewhat intimate death-industrial approach in sound. This is what Alice has to say about her new work.

Q: What means music to you and what do you try to express when composing songs as She Spread Sorrow?

Alice: It’s a way to expose the darkest part of myself and to put out of me all the pain and negative thoughts. A way to communicate. A way to condivide my experience and my feelings. A way to speak and to stay near with other people. And to stay well.

Q: You’ve been previously involved with other music projects so how did you come to set up a solo-project and what are your main sources of inspiration and eventually references when it comes to compose your music?

Alice: Yes, this project is strictly connected to my life and it’s really personal. I prefer to play alone in this moment and eventually collaborations in other projects. Sources of inspiration are movies, books, anime, my nightmares and visions or episodes of my life. “Mine” is inspired by the book “Mine Haha di Wedekind”. The name “Midori” is taken from Maruo. Other inspiration are the sounds of the first industrial Italian generation, like Atrax Morgue, Mathausen Orchestra, Teatro Satanico, Progetto Morte.

Q: She Spread Sorrow rather sounds as a mixture between different influences instead of a music style properly speaking. I think it precisely makes the originality of your music. What’s your own perception about it all?

Alice: Yes, it’s true. It’s difficult to me to stay in a precise genre, because what I do is really instinctive, spontaneous and sometimes the sounds just simply come out and that’s the right sound of that moment. The music is just an explanation of a state of mind and for this reason sometimes it’s far from other genre or other things I have done before

Q: Your newest work “Midori” deals about an interesting and I dare to affirm somewhat dystopian concept. Who’s Midori? What can you say about it?

Alice: Midori is a young girl. She has a really difficult story, she ran from her nightmares and from her wish of death. Her life is something connected to all what is dark, dirt, sick. Or better, that is her thought. Like she has a mark. The concept is mental illness; of Midori and her mother. It’s not connected to society. It’s just a story of mental disease and that name is really symbolic to me, so I chose that.

Q: I’ve been always fascinated about how transposing a conceptual theme into music. I mean how can a listener feel and understand the theme hiding behind noises, sound treatments, percussion… and of course the lyrics. What do you think and how did you work on it?

Alice: For me everything starts with a concept, with a vision. I can’t do anything without this. This is also my limit sometimes, but I need a story, something in which I fall inside.

Q: Why are there less female artists dealing with this kind of music while I think women often add something different and often more subtle to their work (referring to Shedir, ProtoU…)?

Alice: I am sure women will be more and more involved with this kind of music. It’s right, maybe the approach with sounds is just different in relation to male projects. I don’t know. But I like to collaborate with women…our visions are similar and immediate.