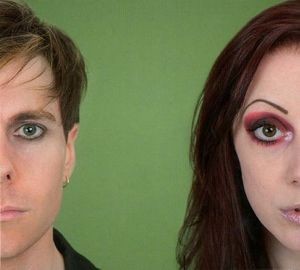 Content: Six years have passed since their previous album (cf. “Warpaint”), but in the meantime we got the promising EP’s “Solo LO” and “Two Steps From Heartache”. James Knights (vocals) and Scarlet (machines & bass) finally have accomplished their 3rd full length, which has been announced as their strongest piece ever.

It always is a good way of marketing to say that your new work is the best thus far, but I can only, but confirm this statement. The English synth-poppers have patiently improved most aspects of their sound. Scarlet Soho has never been a synth-pop clone rather than always trying to innovate in their music genre. And it’s maybe surprising to say that “In Cold Blood” is probably the least innovative release, but simply the best. The work is carried by good-old vintage sounds and catchy arrangements. It often sounds as ‘happy-pop-music’ nevertheless some lyrical themes are rather dark. The least I can say is that this is music for dancing and which I’m sure will seduce the die-hard pop fans.

From the very first notes the work reveals high production skills in sound carried by overwhelming sonic treatments, deep vibrating bass lines, catchy melodies and clear vocal lines. The definitely into vintage sounding “Gigolo” is a first real highlight, which is followed by the already familiar and great sounding “Two Steps From Heartache.” It remains a brilliant piece of pop, which makes me think of Erasure. I here again was conquered by the great bass line running through the song.

I can’t say that “This Town Is Mine” is totally innovative, but it’s the kind of song confirming the taste to open new paths. This is a beautiful song, which is somewhat cinematographic and featuring a surprising trumpet part. The trumpet was played by a guest musician and sounds absolutely great and original. It also appears to be a perfect break before my absolute favorite track “Make The Final.” Here again you’ll notice a cool vintage flavor hanging over the work while the robotic vocals inject a cool space effect to the song. I also have to mention the great sound treatments and good-old dry snare drum running through this track.

Next comes the instrumental “2015”, which here again is a kind of break preceding the indie-pop-like and familiar “Solo KO.” Last, but not least there also is a hidden track right behind “Solo KO”, which is a quiet and somewhat ballad-minded song played on piano.

Conclusion: Scarlet Soho have already been announced for years as a band with a real huge potential, but I think that “In Cold Blood” is the real first album confirming this statement. This is a diversified, original and efficient synth-pop release.