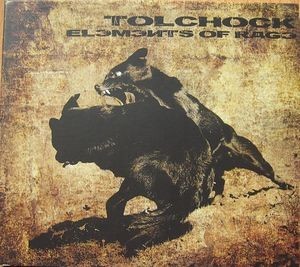 Content: I discovered Tolchock 14 in the late 80s on the phenomenal vinyl sampler “Trans Europa (A Swiss – Swedish Techno-Compilation)” on, which they were featured by other promising Swedish EBM bands like Cat Rapes Dog, Scapa Flow, Dead Eyes Opened and Sepülche Inc. It all was during the golden years of early EBM music where it all sounded magic and unique.

Tolchock 14 became Tolchock during the 90s and went on releasing new stuff at irregular basis. The sound became more eclectic and often empowered by furious guitar parts. It leads the band to define their work as ‘industrial-rave’ while they recently call it ‘physical machine music’. Nine years have passed since their previous opus, but Tolchock is back… maybe for the last time. Well, that’s what they say, but it clearly sounds unpredictable and honestly I hope that they’ll go on releasing new stuff because this work is f****** amazing!

“Elements Of Rage” sounds a bit like a move back to EBM roots, which have been empowered by powerful guitar riffs. It sounds like a mix of different elements and we might speak about agreppo influences merged with EBM elements and industrial guitar parts.

The global power of their work reminds me somewhat of early Dance Or Die, but with a heavier approach. The songs reveal terrific sound treatments and you definitely can hear that this work was not accomplished in a hurry. It is the result of a passionate studio work masterfully lead by the creative mind of Jens Persson and Christer Lundmark, both remaining the ‘brains’ of the band completed by Michael Forslund (guitar) and Jenny Runa (backing vocals).

The vocals of both singers were produced with a real great harmony. Both singers are totally complementary. The sexy and sometimes enraged male vocals are perfectly fit with the somewhat rough and cold female vocal parts. Tolchock is not dealing with the usual sensual female backings and that’s precisely what makes them different from other bands. The vocals are a real important aspect of this album.

Musically, this album features 8 new songs plus 4 remixes. All tracks are essential pieces and it’s really hard to give you favorite ones. The quality of the songs is reaching a real high level. Most of tracks are elaborate and very accessible. I maybe have a little preference for “Day Of Rage”, which is a great power-electro composition. I also want to mention the more into EBM-sounding “Selfextractor” and “Firecell” for its irresistible bass line and great outbursting chorus.

Among the different remixes Machinista did a fantastic job with “Time To Breath.” Biomekkanik for sure is one of the hottest revelations of the past few months and they also made a cool and somewhat groovy remix of “Down In the Hole.” Both remixes left were made Red Mecca and the promising Blipp.

Conclusion: I won’t be surprised if I find this album back in our so-called ‘best of’ albums of 2015. The only thing I want to add is a kind of message for this great band: ‘keep going on guys, keep composing great music’!

Best songs: “Day Of Rage”, “Selfextractor”, “Down In The Hole”, “Firecell”, “Time To Breath – Machinista Remix”.