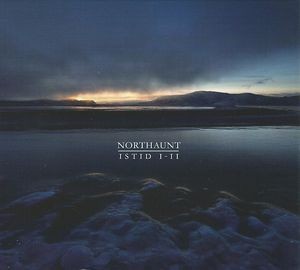 Content: Hærleif Langås’ main project Northaunt remains one of the most renown and established projects dealing with dark-ambient music. Northaunt is not exactly releasing albums at regular basis, but each new work appears to be a well-thought out and conceived composition.

One of Northaunt’s main sources of inspiration remains the ‘high North’. The new album has been introduced as: ‘Once the world was alone, the landscapes had no names and there was no one to see them. An endless number of ice age dawns came and went unseen. The idea of this world, the world as it was before man, inspired me throughout the composition of these tracks. Roughly separated in two parts, one representing the light, the unburdened world before man, the other a much darker side of the same place’.

Speaking for myself I can’t really say that there’s a big difference between both sides and discs of this work. I got the impression that “Istid I” (the first disc) sounds a bit more into a mysterious prosper atmosphere. The tracks have been meticulously built up with long duration of sound waves that bring you into an imaginary endless abyss. The title song leads you throughout a sound labyrinth for more than 15 minutes. You’ll get the impression of being surrounded by icy stormy vibes. With some imagination you can visualize the impressive and desolate landscapes of the high North.

“Boreal” definitely appears to be the main attention grabber of the 1st disc. The composition is somewhat more elaborate revealing metal sound treatments and an overwhelming obscure and echoing atmosphere. Darkness rules over the universe of Northaunt while a kind of irrational fright will progressively start to be part of yourself.

If “Istid I” wants to reflect the ‘light’ I can already tell you it rather sounds more like a pure nightmare sensation. “Istid II” is not that different, but maybe more haunting or should I say tormenting. We’re diving into merciless cold soundscapes built up with crescendo emerging ambient sound waves. It all reflects a kind of nihilistic vision accentuated by the cold blasts and an overwhelming impression of desolation. “Istid II” sounds like the deadly bite of frost and here again the long during cuts will haunt you for more than 37 minutes.

The opening track “Mammoth” appears to be one of the most poignant exposures of this ‘darker side’. The tracks are not that different from each other, but in the end creating a compact entity, which by the simple strength of sound will terrorize you.

Conclusion: This album again appears to be the perfect match between sound manipulations and icy field recordings resulting in a chilling experience. Speaking for myself I prefer the 1st disc reflecting the ‘light’.