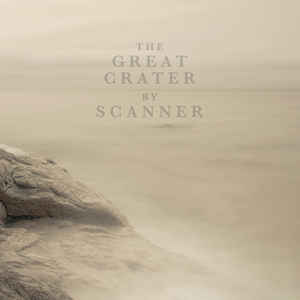 Background/Info: Robin Rimbaud better known under the Scanner moniker is a long-time praised artist active at the wider paths of experimental music. He’s one of those visionary artists operating like a real sonic architect, which has pushed the boundaries of electronic music towards a new dimension. He joined hands with the Italian label Glacial Movements to unleash this new opus, which is inspired by the tale about strange circles appearing in Antarctica.

Content: Scanner remains a creative project, which each time again seems like exploring new paths. The work is sophisticated, sometimes extreme, but then refined with subtle bleeps and field recordings. Rimbaud transforms noises into new tones, creating an abyssal sound universe, which is now quiet and prosper and next creating mystery and paranoia.

“The Great Crater” is bringing different- and sometimes opposite elements together. Next to the familiar experimental sound manipulations he achieved his work with other elements such as epic- and cinematographic arrangements and even the sound of classical instruments.

+ + + : Scanner remains one of the most prolific, and creative spirits of the experimental scene. His work brings electronics towards a higher dimension where multiple influences and an impressive noise canvas have been merged together. This is an album with a visual strength, which you can relax on, but still getting frightened. Experimental music becomes a great artistic creation, which is the mark of all music geniuses. I like this album’s diversity for its global sound production, but once again for belonging to no single established music genre.

– – – : Robin Rimbaud is such a prolific artist it becomes more and more difficult to get surprised by his work. It’s not that it becomes predictable, but I can’t say that Scanner is renewing his sound.