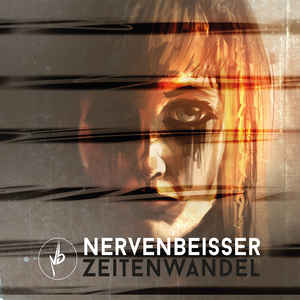 Background/Info: German formation Nervenbeisser is not a new name, but a band striking back 13 years after their official debut album “Geschlechterschlacht”. In the meantime they also self-released the “Bondage II”-album (2015), but we here can speak about a comeback.

Content: German bands singing in German and dealing with gothic-, rock-, industrial- and metal music are rapidly linked with Rammstein. This band clearly sounds inspired by Rammstein and I especially think about their electronic treatments, but still the furious and carrying guitar playing. The songs are hard and powerful, but still revealing a perfect balance between electronics and guitar. The work has been accomplished by a few guest musicians (featuring Marc Werner from Sabotage QCQC, Nude) who were invited to join in.

+ + + : Nervenbeisser took me by surprise. This is a great opus revealing well-crafted and powerful songs. There’s a brilliant harmony between guitar and electronics, but I also have to mention the vocals (sung in German) and the furious cadence. There are no songs to throw away and that’s definitely one of the main strengths of this work. You often get albums with one or two great cuts while the rest of the work remains pretty average. “Zeitenwandel” features great cuts and multiple cool songs, which makes this work essential if you’re into this kind of music.

– – – : The opening- and final song both are the single pieces which can’t convince me. But all what comes in between is simply brilliant!

Conclusion: Rammstein hasn’t released a new studio album in years so we’ve to enjoy bands such as Nervenbeisser, which feel a bit like the natural heir of the German industrial-metal genre.