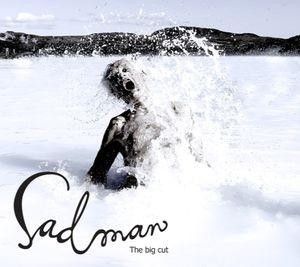 Background/Info: Sadman is a band I immediately felt in love with since their debut album “Cold In The State Of Me” (2008). Unfortunately those Swedes are not releasing new studio work on a regular basis. The previous album “9th And Last Life” already dates back to 2010 although the band struck back in 2014 with the “Drama”-EP.

One of the main changes consist of the line-up, Lasse Fernström and Mattias Räftegård having been joined by two extra members.

Content: I can’t really say that Sadman has evolved in sound and influences although the new work became more ‘indie-like. The songs still reveal a delicious reverie, which gives you the impression of flying through the air. The songs have been made with delicacy and a perfect balance between electronics and guitar. You now and then might notice vague Depeche Mode influences, but globally speaking “The Big Cut” is more evasive.

That’s precisely what makes this work sound a bit like a movie soundtrack. There’s an elevating element emerging from the choruses creating certain visual appeal. “King Of A” is an absolute masterpiece in the genre. Sadman also stands for a kind of beautiful melancholia and that’s one of their main influences over the years.

+ + + : “The Big Cut” is a beautiful and deeply artistic opus. It sounds sweet and dreamy while accomplished with a real artistic elegance.

– – – : The debut work “Cold In The State Of Me” remains their ultimate album. “The Big Cut” features a few outstanding cuts, but the main songs are a little too similar.

Conclusion: Sadman is one of those electro-pop bands avoiding the usual standards. They bring their very own approach, which remains extremely dreamy and relaxing.