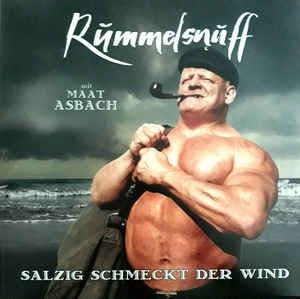 Background/Info: ‘Käpt’n Rummelsnuff’ commonly known as Rummelsnuff has now been active for several years and can look back at an impressive discography (mainly released on Out Of Line). It seems it was the right time to consider a ‘best of’ featuring some of the German bodybuilder’s greatest hits. The songs have been remastered and are available next to the CD-format on vinyl as well. There’re a few remixes featured as well.

Content: Rummelsnuff has always been something apart; a sound, which is hard to describe, but especially pretty different from what we’re used to hearing on Out Of Line. The songs sung in German tell crazy little stories. It’s pretty fun-like and constantly carried by this typical accordion sound reminding to sailor songs. But you’ll also notice songs with a bombardon.

Other cuts are more electronic and revealing a mix of electro-pop and even EBM. There’s an interesting remix of Pankow featured.

+ + + : The main strength of Rummelsnuff is the unique and totally uncompromised approach. There’s no other formation like Rummelsnuff and ‘Popeye – ‘Käpt’n Rummelsnuff’ makes no compromises. It remains a mystery to me why this band gained that recognition (in their homeland), but it for sure has something to do with the image and the weird music. Rummelsnuff gets ‘dark souls’ laughing. Speaking for myself I prefer the more electro-pop driven songs although they also have something pretty different from the usual standards.

– – – : This album is mainly meant to please the heaviest fans of Rummelsnuff. It’s starts to bore me after a while, the songs being too repetitive and drive by the monotonous singing of the ‘captain’.

Conclusion: Rummelsnuff will probably never be successful in non-German speaking countries except if he would sing in English. It remains a funny project and one of the biggest music challenges from this scene, but after all these years the band is still alive.