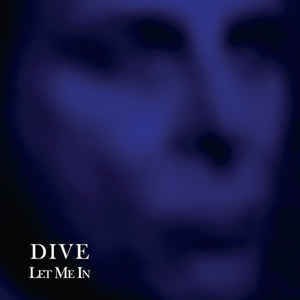 Background/Info: The legendary The Klinik front man last year struck back as Dive unleashing a great new opus entitled “Underneath”. One of the album’s hits “Let Me In” has been now released as EP-title song featuring 2 remixes of “Let Me In” plus 2 cuts. Notice by the way the EP is only available on vinyl format and of course as a digital release.

Content: “Let Me In” was remixed by Mildreda, the electro-industrial project of Belgian artist Jan Dewulf (known from Diskonnekted) and Attacke. Dewulf and Ivens know each other from the successful EP “Frozen”, which was released as Diskonnekted vs. Dirk Ivens. It sounded pretty Dive-like so Mildreda could only re-industrialize “Let Me In” in a hard cut. The remix by Attacke sounds pretty club-minded.

Both other and new cuts are the instrumental and more experimental-like “Hollie” plus a new Suicide cover version. Dive this time covered “I Remember” together with Alvar.

+ + + : “Let Me In” is the best choice as EP title song. The original electro-industrial cut was masterly remixed by Mildreda and Attacke. This song sounds like pure electro-industrial featuring the spooky vocals of Dirk Ivens together with great music carried by a terrific chorus.

– – – : I was less captivated by both other cuts. “Hollie” sounds like a pure B-side while the cover version of Suicide is not the best one I’ve heard from Dive. If you remember “Rocket USA” for example and you compare it with “I Remember” you’ll notice the hiatus. From a very personal point of view I think it also is a pity an artist like Dive no longer releases this kind of EP on CD format.

Conclusion: This maxi is a perfect opportunity to get back to the “Underneath” album, which remains a great album symbolizing the comeback of Dive after more than 10 years!

Since you’re here … … we have a small favour to ask. More people are reading Side-Line Magazine than ever but advertising revenues across the media are falling fast. And unlike many news organisations, we haven’t put up a paywall – we want to keep our journalism as open as we can. So you can see why we need to ask for your help. Side-Line’s independent journalism takes a lot of time, money and hard work to produce. But we do it because we want to push the artists we like and who are equally fighting to survive. If everyone who reads our reporting, who likes it, helps fund it, our future would be much more secure. For as little as 5 US$, you can support Side-Line Magazine – and it only takes a minute. Thank you. The donations are safely powered by Paypal.
Tags: Diskonnekted, Klinik, Mildreda