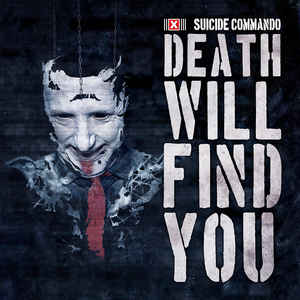 Background/Info: Last year Suicide Commando released the album “Forest Of The Impaled”, which Johan Van Roy introduced as his most personal and intimate album to date. “Death Will Find You” moves back to this album featuring several remixes of 2 songs originally featured on the album plus 2 new cuts.

Content: Let’s start with both new cuts, which perfectly stand for the ‘obscure’ sound of Suicide Commando. One of the songs (cf. “Black Hole”) was written together with Mario Vaerewijck (live drummer and ex-Insekt). Both songs totally fit with the inhibited style of the full length.

Among the remixes you’ll get an interesting selection of bands (The Firm/E-Craft, Ruined Conflict, Binary Park and Bornless Fire). Notice by the way Suicide Commando made a remix of each song as well.

+ + + : It’s quite interesting to get 2 new songs featured on this EP although the best exponents are 2 remixes by Binary Park and Ruined Conflict, both reworking the original versions of “We Are Transitory” and “Death Lies Waiting” into cool dancefloor-killers. There also is a cool remix of The Firm/E-Craft.

– – – : I’m disappointed by the new cuts, which don’t sound like the best and most inspired work I’ve heard from Suicide Commando. I think this EP was the right place to put them on.

Conclusion: This EP is a nice addition to the latest Suicide Commando-album. It first of all is an item that will be purchased by the heaviest fans of the Belgian master of dark-electronics while it doesn’t bring that new for the others.