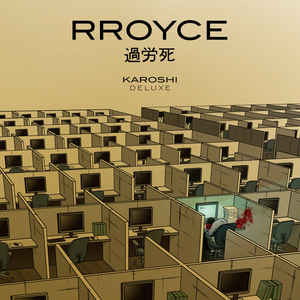 Background/Info: Rroyce is a German trio, which released their first length album on Thexoomo.net and the second one Kayal Records. The second work entitled “Karoshi” refers to ‘a Japanese term for death by a sacrifice job’. This album got originally released in 2016 and has been re-released as “Deluxe Edition” on Infacted Recordings.

Content: Infacted Recordings is a good sonic platform for Rroyce to gain a wider popularity and especially abroad from Germany. The songs are clearly inspired by electro-pop influences. The songs are pretty elaborated and there’s some ‘drama’ emerging at the surface. You’ll hear some piano arrangements injecting a refined and somewhat melancholic flavor on top of the work. The songs have been accomplished by the deep timbre of voice of the singer.

+ + + : I’m not used to starting with the remixes, but I have to admit that when a less familiar formation got remixes from Beborn Beton, Neuroticfish, Rotersand and Eisfabrik you can only be intrigued by this album. The remixes are pretty cool by the way, but I prefer the original songs revealing the very own ‘pop’ approach of Rroyce. The songs have been built up meticulously, now and then reaching a truly climax. I also like the kind of dramatic expression of this work, which is mainly noticeable at “The Dying Of Your Pride”.

– – – : Because Rroyce doesn’t sound like a ‘classical’ electro-pop band they for sure will catch the attention of ‘fine-pop-tasters’, but at the other hand they also will maybe a little less ‘complicated’ for the average electro-pop lovers. The acoustic versions aren’t my favorite cuts while I also expected a bit more out of the remixes by such great artists.

Conclusion: Rroyce is an interesting formation, with a very own sound revealing different ‘shades of electro-pop music’.

Best songs: “Running With The Sheep”, “The Principle Of Grace”, “I Like It, When You Lie”.

Since you’re here … … we have a small favour to ask. More people are reading Side-Line Magazine than ever but advertising revenues across the media are falling fast. And unlike many news organisations, we haven’t put up a paywall – we want to keep our journalism as open as we can. So you can see why we need to ask for your help. Side-Line’s independent journalism takes a lot of time, money and hard work to produce. But we do it because we want to push the artists we like and who are equally fighting to survive. If everyone who reads our reporting, who likes it, helps fund it, our future would be much more secure. For as little as 5 US$, you can support Side-Line Magazine – and it only takes a minute. Thank you. The donations are safely powered by Paypal.
Tags: Eisfabrik, Infacted, Neuroticfish, Rotersand, Rroyce