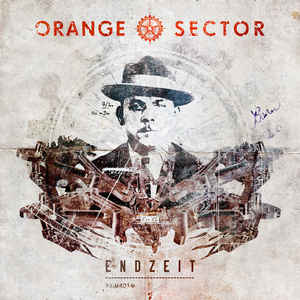 Background/Info: Orange Sector remains one of the most famous EBM bands from the 90s. After a hiatus of several years they came back to life in 2005 and started releasing new EBM work. “Endzeit” is a look back, kind of ‘best of’ from this second Orange Sector period. The bonus disc features an impressive list of remixes.

Content: The fans of Orange Sector will rediscover some of the band’s hottest songs and mainly EP-title songs from the ‘new millennium’-years. Hard and straight forward, driven by dry, cutting bass lines, carrying choruses which are easy to keep in mind, a danceable kick and powerful vocals are the main sound elements to define the sound of Orange Sector.

+ + + : This album is an opportunity to rediscover some of the bands hottest songs from the 21st Century. I’m referring to “Der Maschinist”, “Geile Zeit”, “Glasmensch”, “Monoton”, “Stahlwerk” and “Farben”. It now becomes clear why Orange Sector remained a leading EBM formation. It’s all about power, solid bass lines, energetic body beats, commanding vocals and simply a ‘healthy load of sonic violence’. Orange Sector is a sort of transposition of early DAF into modern times. The songs are enraged and some of the lyrics and samplings are clearly engaged.

The different remixes are still history and I here would recommend the work accomplished by Blitzmaschine and the poppy “Club Mix” of “Touch” by Orange Sector.

– – – : A ‘best of’ always is stuff for discussion, but it doesn’t bring anything new. I however think a band like Orange Sector deserves this kind of release.

Conclusion: Orange Sector was one of the leading formations during the 90s, but they’re still ruling over the new millennium years. I’m not sure if the best is yet to come, but I think they’ll go on releasing EBM from a high qualitative level.

Since you’re here … … we have a small favour to ask. More people are reading Side-Line Magazine than ever but advertising revenues across the media are falling fast. And unlike many news organisations, we haven’t put up a paywall – we want to keep our journalism as open as we can. So you can see why we need to ask for your help. Side-Line’s independent journalism takes a lot of time, money and hard work to produce. But we do it because we want to push the artists we like and who are equally fighting to survive. If everyone who reads our reporting, who likes it, helps fund it, our future would be much more secure. For as little as 5 US$, you can support Side-Line Magazine – and it only takes a minute. Thank you. The donations are safely powered by Paypal.
Tags: AD:Key, Blitzmaschine, DAF, Dominatrix, EBM, Endzeit, Frontal, Infacted, NordarR, Orange Sector