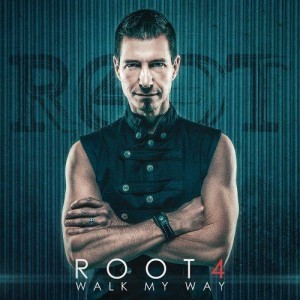 Background/Info: Set up and driven by Hauken Hein in the early 90s, Root4 is not what I would call a prolific band. The band releases new work on an irregular basis. “Walk My Way” is their first full length in nine years. Notice by the way that the band already released three singles from songs originally featured on “Walk My Way” although one song (cf. “Follow Me”) was originally released in the late 90s.

Content: I in a way rediscovered Root4 by this new opus, which is clearly driven by electro-pop music, but mixed with harder EBM elements and hard, punching dance kicks. The songs are empowered with guitar parts. The songs have been sung in English and German. There also is a surprising cover version of ASCI Disko (which has been released as EP titlte song as well).

+ + + : Hauke Hein and Chris Bernhardt (second member and producer of the band) have accomplished a professional and mature production. The songs have been composed with great electro treatments, but also mixed in a high tech format. The album reveals a great twist between pure pop elements and harder, empowering aspects like the heavy dance beats and guitar riffs. “Walk My Way” sounds refined, subtle and still powerful. The vocals are passionate and revealing a talented front man.

– – – : I don’t see real minus points about this work. There are for sure a few cuts, which are less convincing, but generally speaking this work is a real cool surprise.

Conclusion: “Walk My Way” stands for the resurrection of Root4 and who knows, maybe a real breakthrough. This band deals with a kind of ‘free-pop’ style mixing power and elegance resulting in several potential hits.