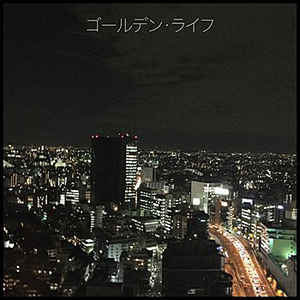 Background/Info: Trade Secrets released a few productions in the late 90s, but 2017 appears to be the year of resurrection for this formation driven by F.J. DeSanto, John Glenn Kunkel, Mike ‘Ash’ Venezia and Charles LaBarbara. Most of those members are still involved in many other projects. A few guest musicians also contributed to this EP, which more appears to be a mini-album featuring 6 songs.

Content: “Golden Life” is not exactly the kind of work I expected to get released on Distortion Productions. The songs are into groovy sequences and mainly featuring a kind of lounge approach mixed with some elements of pop music. Some passages are quite sensual and especially when joined with some spoken like vocals.

+ + + : The least I can say is that “Golden Life” is a well-crafted piece of music. It also is the kind of sound you can fully enjoy when sitting in a lazy chair and enjoying sunshine and drinking a cocktail in good company. The sensuality running through this work is pleasant. Trade Secrets also reveal the open-minded spectrum of Distortion Productions which has used to get us familiar with other –and more underground-like productions.

– – – : I’m not that convinced this is the right label for Trade Secrets or the right band for the label.

Conclusion: The production is not bad at all, although it feels a bit like going to the movies to watch a horror movie but getting a romantic picture instead.

Since you’re here … … we have a small favour to ask. More people are reading Side-Line Magazine than ever but advertising revenues across the media are falling fast. And unlike many news organisations, we haven’t put up a paywall – we want to keep our journalism as open as we can. So you can see why we need to ask for your help. Side-Line’s independent journalism takes a lot of time, money and hard work to produce. But we do it because we want to push the artists we like and who are equally fighting to survive. If everyone who reads our reporting, who likes it, helps fund it, our future would be much more secure. For as little as 5 US$, you can support Side-Line Magazine – and it only takes a minute. Thank you. The donations are safely powered by Paypal.
Tags: Trade Secrets