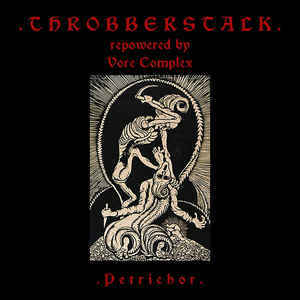 Background/Info: This album is something special; it’s the meeting between 90s formation Throbberstalk, which has been remixed by the contemporary project Vore Complex. Behind Vore Complex is hiding Ben Power, who seems to be a prolific artist and a real huge fan of remixes. I noticed he already released an album entitled “Pavane” on, which he only remixed established names from the dark-electro and EBM scene.

Content: If you’re a bit familiar with the original stuff of Throbberstalk you for sure will recognize the dark-electro & ambient format reminding me of bands like Mortal Constraint, Mentalo & The Fixer, Skinny Puppy and co. The original approach has been mixed with a more contemporary input injecting a new life into the songs. The music of Throbberstalk has been a bit polished and in a way reinvented by Vore Complex

+ + + : This concept is nothing new although I can’t remember to have heard a band, which is no longer active remixed by a contemporary formation. It’s a meeting between different generations, but the love and passion of music has no limits. I’m sometimes missing the original ‘rough’ format of Throbberstalk, but at the other side I really enjoyed some reworked cuts featuring modernism and refinement.

– – – : I’m not sure this album will get its deserved recognition. When a forgotten and rather unknown 90s formation is remixed by an unknown contemporary artist you don’t really expect it will rapidly become a work everybody will talk about.

Conclusion: I think this work is a late consecration for Throbberstalk, which never expected to get remixed by a new and contemporary formation. Well, it’s an original idea bringing the sound of Throbberstalk into a new dimension.