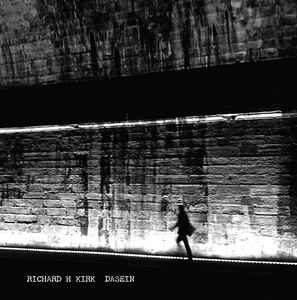 Background/Info:  Sheffield based Richard H. Kirk entered into history as founding member and creative spirit behind the legendary Cabaret Voltaire. Active since the late 70s Richard H. Kirk now released his first solo-album since “Reality Is Opposite”.

Content: Time has no real impact on the creation and sound of Kirk. “Dasein” sounds a bit like a contemporary version of Cabaret Voltaire. You’ll rapidly recognize similar arrangements, vintage sound treatments, industrial guitar play, saxophone intrusions and tons of effects, samplings and other sonic manipulations. Richard H. Kirk remains a creative spirit who makes no compromises, but simply exorcised his very own music ideas.

But “Dasein” is not only into Cabaret Voltaire reminiscences; you’ll also discover more contemporary tracks carried by groovy sequences and even EBM bass lines. Most of the tracks are instrumentals, but you now and then also will hear vocal lines.

+ + + : Richard H. Kirk hasn’t lost his initial spirit to create an experimental and intelligent work. He remains a very unique and visionary artist. “Dasein” still has that good-old avant-garde touch emerging from the songs. It also is an album that gets back to the early, experimental roots of the artist, but mixed with more contemporary elements he experiences with during the early millennium years. The opening cuts of “Dasein” will definitely appeal for the fans of Cabaret Voltaire; great vintage electronics mixed with industrial/abstract guitar playing and a maelstrom of effects.

– – – : There’s a kind of hiatus between the debut songs and the second part of the album, which becomes more groovy. It however remains in the truly spirit of the Richard H. Kirk sound-DNA so you don’t hear me complaining.

Conclusion: I’m always grateful when a pioneer like Richard H. Kirk is showing the path to follow to younger generations. This album stands for intelligence and the creative spirit of a genius who doesn’t care about fashion trends and established standards. “Dasein” is a great work and I dare to say an essential album in the late career of this musician.