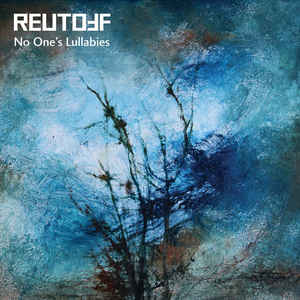 Background/Info: Reutoff is probably one of the most famous and renowned industrial formations from Russia. They’ve been active since the late 90s and have released an impressive number of productions. This is their 9th full length album to date. “No One’s Lullabies” was originally released on cassette format in 2014 on Sea State. Later on the band released it on digital format adding 4 extra cuts. Zhelezobeton is now releasing the entire album on CD.

Notice by the way that the artwork of the album was made by Fabrice Billard who you for sure remember as the owner of the French label Divine Comedy.

Content: Reutoff calls their music ‘post-industrial’, which clearly will appeal for the industrial music lovers. The work is driven by heavy industrial sounds and cadences mixed with dark-ambient atmospheres. From drones and bombast to crystal-like bleeps to ghostly whispers the tracks are resulting in a kind of apocalyptic vision. The lullabies of Reutoff rapidly become the source of real nightmares, which will terrorize you.

But next to this heavy industrial terror and some nihilistic soundscapes the work also reveals surprising and unexpected influences like a kind of jazzy ambient passage and psychedelic elements. It’s just one little element, but it reveals the versatile character of the work.

+ + + : I like the versatile aspect of the work, however it all remains pretty compact. The composition has been extremely worked out and even features a real transcendental climax, which is one of the ‘new’ cuts, entitled “Die Stille Scheint In Der Finsternis”. There’s a perfect fusion between all of the influences.

– – – : Reutoff is not exactly what I should call an average, or stereotypical industrial formation. It makes the originality of the formation, but still a reason why industrial ‘purists’ may have difficulties to be convinced by their versatile sound.

Conclusion: The original cassette version was released on 80 copies so it should have been a shame to keep this album completely underground. Together with the extra tracks, this is a great piece of modern industrial music.